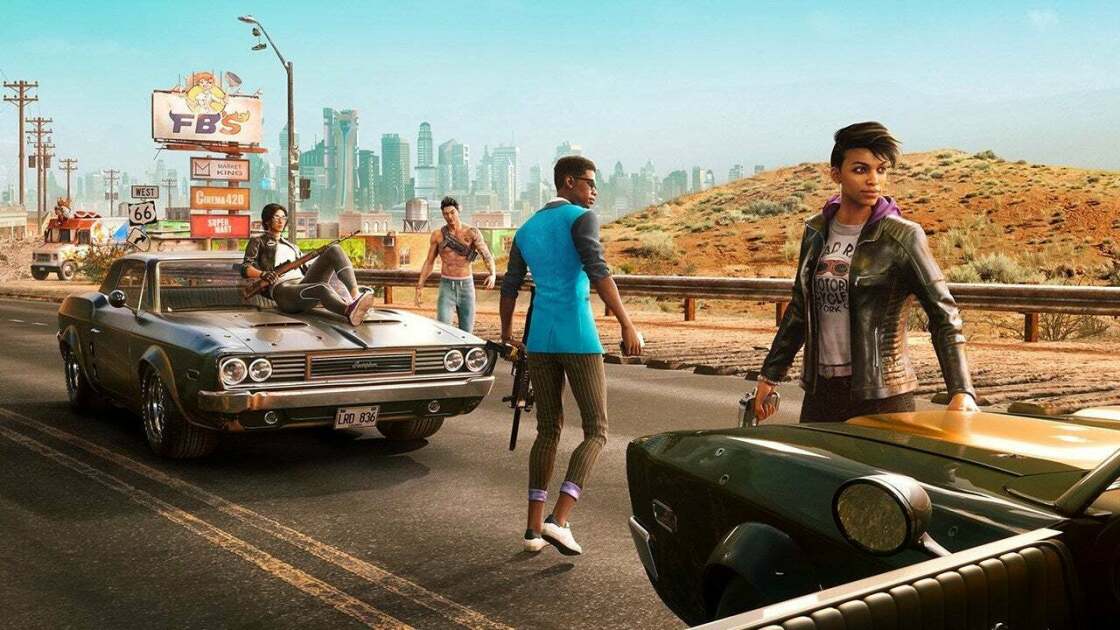 Ad P
On Aug. 23, Volition drops the open-world crime epic Saints Row for PC and consoles. The non-numbered title is a reboot of the franchise set in a Las Vegas-esque city, and it’s not hard to see this as a shot across the bow at Rockstar’s in-development Grand Theft Auto 6. But in many ways, even though Saints Row is seen as an imitator, there’s a lot of stuff that it does way better than the original. Here’s our take on some of the ways GTA fails in comparison. Is this outrage bait designed to get Rockstar stans fuming in the comments? Maybe, but it’s also an honest appraisal of two franchises that mean a lot to us. And friendly competition makes both sides work harder to up their game, and that’s a net positive for gamers.

As a criminal, sometimes you have to resort to violence to get your point across. While GTA’s thirst for realism goes out the window when your wanted level escalates, low-level shootouts and the like just… aren’t very much fun. While Rockstar cut out the wacky and fun weapons from the older games, Volition added in even more, and the combination of tactical depth and absurd boomsticks makes skirmishes in Saints Row a lot more enjoyable throughout the game. GTA V’s auto-aiming bullet sponge enemies make us cringe every time we get into a firefight. Gun combat in video games is unrealistic by default because if it wasn’t we’d just be playing Counter-Strike, so lean into it and at least make it engaging.

Rockstar has slowly been pivoting the GTA series towards robust, movie-like narratives, and to do that you have to have well-defined lead characters. That’s fine for them, but when we’re playing video games it’s nice to be able to identify with our on-screen avatar, especially in a sandbox game where there’s so much freedom in other areas. Saints Row letting you take your Boss and tweak just about every aspect of their presentation, including voice actor and even gender, makes you feel like your journey through the game really belongs to you, instead of just being an actor in somebody else’s movie.

One of the great disappointments of the GTA series is how little you can actually interact with the fantastically detailed worlds Rockstar puts together. Sure, the cities and surroundings are massive, but they’re also pretty empty and big parts of them are unreachable. By introducing absurd superhuman abilities, Volition is able to make the smaller worlds of their games more vertical and let the player explore with enhanced mobility options. Cities aren’t as interesting when you only see them from ground level, so being able to get high adds a ton to Saints Row.

The dark and ruthless universe of Grand Theft Auto makes you feel like it’s you against the world, and even the trio of protagonists in the last game still felt pretty lonely. But the Saints are a gang, and they look out for each other. Johnny Gat, Shaundi, Pierce, and the rest are there to back you up, and they really feel like allies, not just mission-dispensing NPCs. Being able to bring the homies on missions and into battle makes everything you do a little more meaningful, so when something bad happens to one of these characters it actually impacts you emotionally.

Sure, there is a lot of stuff you can do in GTA V, but not much of it is meaningful or rewarding. You could say that about real life, but I already live in real life. Saints Row has developed the art of the side hustle into a passel of activities that could all be games in their own right. Just as one example, the “Insurance Fraud” missions where you throw your near-indestructible body into an intersection to try and squeeze cash out of Geico and State Farm through injuries and property damage are ridiculously fun. There’s always something different to occupy your time in these games, as opposed to the limited and ultimately meaningless side stuff in the GTA franchise.

Ask any fan and they’ll tell you: The worst parts of most Grand Theft Auto games are the missions. While they’re obviously necessary to move the story forwards, the difficulty in these segments often seems out of whack, especially when they involve driving. Even worse, there usually seems to be only one correct way to beat them, and deviating from the script leads to frustrating re-dos. In Saints Row, Volition respects the player enough to leave missions open-ended, allowing for much more improvisation and personal preference. That’s just good game design.

Part of the joy of video games is watching your on-screen avatar improve as you play, becoming able to perform different feats and tackle tougher enemies. The grounded nature of the GTA games resists that sort of abstraction, and for the most part, the abilities you start a game with are the ones you end with. Sure, in GTA Online you have stats you can level up, but not in the main game. However, in Saints Row, the player has access to a robust upgrade system that puts them in the driver’s seat for growing their abilities, letting them increase running speed, decrease damage taken, earn money faster, and more.

Recommended by Our Editors

There’s no denying that the Grand Theft Auto games can be pretty funny, but there’s something a little unsavory and cruel about a lot of Rockstar’s jokes. Leaving aside the casual homophobia, the franchise seems to revel in discomfort and abuse. While we’re not afraid of a little darkness, it gets to be a little much at times. The free-wheeling goofiness of Saints Row is just easier to swallow, especially in large doses. We’re a little concerned that the new game seems to be disposing of some of that trademark humor, but we’ll see how badly it’s missed.

It’s just more fun to wreak havoc with a friend, and Saints Row has you covered there. All of the games support co-op in a variety of ways, with the new one featuring cross-platform play as well. You could argue that GTA Online is Rockstar’s response to that, but there’s a gulf of difference between playing story mode with a friend and contending with the universe of griefers and the predatory economy of Rockstar’s offering. Co-op has been core to Volition’s series from the beginning and they’ve got it down to a science.

Saints Row has Keith David. GTA does not. End of article.

Get Our Best Stories!

Sign up for What’s New Now to get our top stories delivered to your inbox every morning.

This newsletter may contain advertising, deals, or affiliate links. Subscribing to a newsletter indicates your consent to our Terms of Use and Privacy Policy. You may unsubscribe from the newsletters at any time.