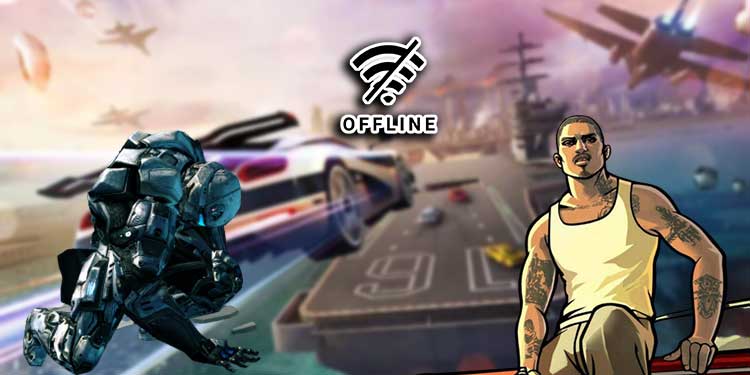 Ad P
Many games come and go, but very few games deliver so much impact that it remains on the library of our phones and pc forever. And The sweet thing is, they don’t require an internet connection to play. You can play them anywhere and anytime you like. The beauty of passing the time and experiencing amazing games is sublime.

Some are entertaining, while others are immersive with a structured story and well-executed gameplay. These are the twenty best offline games you can play anywhere and anytime.

Lost in the dark world, you play as a child who finds meaning in all the dark settings of the world. It’s a puzzle platformer game with horror elements in it. One thing I love about Limbo is how it attracts players to its monochromatic creepy world without any clue.

After the final scene, I was left confused about the journey I made and the conclusion the game gave me. I had to understand, so I studied the explanation and how it was all made at the end. It’s the best game to play at night with a headset on.

I have spent hundreds of hours creating and exploring the vast world full of mysteries. Minecraft is the game that has all the elements I wanted in a game, an open-world sandbox life simulator game where you can go exploring into other realms and craft your own Adventure using mods or creative modes.

Exploring new lands and building your base on the top of mountains with huge lights and a cozy interior makes Minecraft you can relax with. The sense of feeling Minecraft gave me will always be in my core memory.

I play as a wanderlust traveling from one location to another. The freedom Minecraft provided me to explore, craft, and build the game as a true Masterpiece.

I never thought a simple top-down ARPG could be so addicting. Probably because of its humorous dialogues, charming yet quirky characters, and excellent narration. Yup, You have a narrator describing most decisions made by us as a protagonist.

The game sets a particular kind of charm I have never found in any other games. Its classic musicals, great magical companion, and sarcastic dialogues have a goofy fantasy vibe.

Here we again, back to Groove street doing business with my homies. Among all the games in the GTA franchise, San Andreas is my favorite game on the go. No more notifications or game updates or any online calls, Just playing the game in my own style.

Gunning down chasing officers on the back seat of a motorcycle while Big Smoke takes control, pulling off some amazing stunt. Those were the badass moments I will never forget. GTA San Andreas is a Masterpiece from radio host and music to amazing character building.

NOVA 3 is a first-person action-adventure into the sci-fi world. Gameloft has created a truly immersive game with amazing graphics and smooth gameplay, all in the palm of your hand. Fight enemies on ten different levels with its own immersive from earth to Volterites city.

The game is filled with amazing cutscenes that test the true potential of mobile gaming, from advanced sci-fi weapons and powers to controlling Mech suits and vehicles. NOVA 3 provides all the fast-paced first-person action.

Dip your toes into some relaxing farming life simulator as you farm, forage, mine, fish, and connect with the people of Pelican town. There is so much to do in the first few weeks inside Stardew Valley, but the hard work is worth it when you see your trees-covered lands thrive into a beautiful farm yielding crops and grazing cattle.

Inside the addictive gameplay lies a deep story told from the perspective of the townspeople. Dwelling into the life of each person, you get to know about their lives, their dreams, and how they portray their life. These are some contents that stay in players’ minds years after the completion of the story.

Memorable characters, seasonal events, reconstructing town hall, building relationships, and many more. Because of these aspects. Stardew valley is considered the best offline game of all time; I recommend you play on the big screen for more immersion.

Although Gameloft has released Asphalt 9, I never felt the excitement of the adrenaline rush while pulling off barrel rolls or wrecking opponents’ cars like I used to feel in Asphalt 8. I enjoyed playing asphalt eight offline or local player co-op with friends.

Asphalt 8 is still my favorite racing game because no other game has given me the flexibility of choosing a number of awesome cars and boosting them on various tracks. Speeding my car with nitrous and wrecking opponent vehicles is one of the most satisfying feelings of playing the game, along with insane stunts.

A classic puzzle game that demands your attention to puzzle-solving skills. Exercise your brain on a simple tile-removing puzzle that keeps on getting difficult as you progress through the levels.

With the four levels of difficulty mode and about four thousand individual levels, it’s easier to pass the time scratching your head for the solution and increasing your cognitive skill after each level. A go-to game that requires less memory space but more brain power.

The world is brimmed with beautiful locations where you can ski through landscape collecting stars. And customizing your characters for great performance.

Slide through golden sunset, rainy terrain, and snowy tundra as you snowboard endlessly, jumping from a chasm to grinding flag ropes. The game’s charming atmosphere and minimalist designs make it so captivating that it’s hard to put down.

Catch your escaping llamas while performing some amazing tricks. Alto’s Adventure is a pleasure to play the game with no intense action or story, Just snowboarding in a beautiful endless world.

Upgrade your car and run through a zombie-filled platform to reach the evacuation ship. The zombie apocalypse has broken, and your only hope is to build a badass vehicle that can sustain and blow zombies out of the way.

Unlock varieties of vehicles to escape alive from the hell hole to reach your ultimate destination. Destruction is the name of the game as you break bridges, explode barrels and smash zombies in their faces with your vehicles. It’s an absolute blast to pick up and play.

A simple game where you have to break glasses by hitting them with balls of steel. An endless 3D arcade shooting-style game with the most creative gameplay execution. Embark into the minimalist surreal world and smash your way.

The gameplay is carried out perfectly with its meditative background music mixed with realistic glass physics. Smash Hit is a type of game you can unwind and play on your own accord.

While temple run introduced the world with its endless running genre, blades of Brim redefined the game by adding story depth, a new portal to discover, and enemies to defeat. It is, after all, an endless game with much content.

Smashing evil crystals, unlocking new characters with weapons, and using new abilities to rush through levels are the main premise of Blades of Brim. But there is the desire to reach the end of all this running as you dwell into an unknown universe from the portal gate and discover new enemies.

A first-person sniping and shooting game that is heavy on its comic-style story aspect. The game also challenges players with its shooting mechanics that are more focused on realism, although the visuals are dark and washed out.

You play as a hitman who is tasked to perform different missions throughout the game. The varieties from sniping and shooting to melee boxing keep the game fresh. And the inclusion of some serious backstory makes Lonewolf even more intriguing.

With its responsive controls and using each cat’s abilities to complete the levels is super fun. Super cat Bros’ cute visual aesthetics and gameplay are heavily inspired by Super Mario World. Jumping from the platform while defeating cute creatures is a fun adventure that brings back the memories of old-school games.

Choose from different companion helpers and bring them along in your journey. Select different cats for different levels as you go on rescue your siblings in Super Cat Bros.

Defend your brain from home-invading zombies by planting fierce plants that will knock down waves of zombies.

There are zombies on your lawn, backyard, and rooftops. Unlock amazing plants and vegetables as you progress through levels. There are also different types of zombies who will swim, leap and fly to reach your house.

A tower defense game that has you think in a strategic way because zombies approach in different varieties. There are even Michel Jackson zombies who spawn four additional zombies on your lawn.

Besides the main campaign mode, there are puzzle modes, mini-games, and even a greenhouse garden where you can grow plants to earn money to purchase new items.

Engage in an intense battle using various weapons and power-ups in a Metroidvania-style roguelike game. Its fast-paced action with deployable weapons makes the game as exciting as ever. Combine different abilities from long-range bows to deflecting shields and killer iconic weapons from various other games to shred enemies into pieces.

Its interconnected levels providing complex platforming along with the boss at the end keep the game interesting, and with each run, you rise even more powerful, unlocking a new set of weapons.

A 3D puzzle game set in a dark and mysterious environment. The game has some of the most exciting and well-designed puzzles that push players’ minds to observe the game from every different angle.

The Room series is critically praised for its clever contraception and beautiful graphics, adding a new dimension to the creepy vibes it gives. Explore the darkness of creepy rooms and unravel the story behind it by putting together symbols focusing more on the cosmic horrors of the world.

A 2.5D hack and slash game set in the dark fantasy world, you play as an unknown warrior who is set out on a quest to save the world from a corrupted realm.

With its fluid combat and responsive controls, the game is interactive in combat aspects. Dodging feels satisfying, and the enemies’ attacks are very well telegraphed to help you know what your window for safety is.

Explore the fantasy world with thrilling action and dangerous bosses—Master the skills of combat in the fast-paced hack and slash game.

Machinarium is a puzzle game set in a steampunk world rusting and bursting with beautiful visual aesthetics. The game tells the story of a charming tin can robot who embarks on a journey to save his beloved from oppressive police security.

Along with beautiful world design lies the clever puzzles that ooze its authenticity, speaking volumes of the intricate environmental contraption. Machinarium’s charming characters and pleasing worlds will keep you busy and interested in the lives of robotic creatures within the world.

Ocean horn is a delightful treat for classic Zelda as the game incorporates elements of Zelda games and adds its own unique set of contents for players to explore in its story.

A top-down action RPG that has you explore the scattered island and dungeons hidden beneath the surface. Solve environmental puzzles, fight giant bosses, and set sail in a classic Zelda-like game.