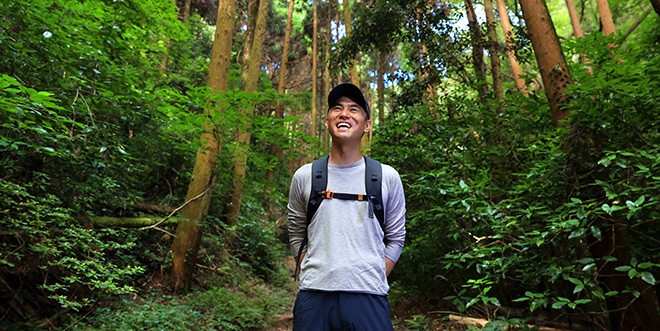 FUKUOKA–Yoshihiko Haruyama’s experiences, which may appear erratic, all came together to create a smartphone app that has captured a top market share in the field of mountaineering and other outdoor activities.

The app, called Yamap, allows its users to know precisely where they are on a map, even when they are outside the coverage areas of cellphone networks, by downloading the necessary maps ahead of time.

In July, downloads of the app totaled 3.2 million, about two-thirds the population of mountain climbers in Japan, about nine years after Haruyama started services.

Tired of listening to lectures in massive classrooms, Haruyama, then a freshman student of law at Kyoto’s Doshisha University, went on a bicycle trip around Kyushu in spring 2000 and visited Yakushima island, about 60 kilometers southwest of the southern tip of Kyushu.

He worked at an inn as a live-in employee and had free driving and fishing lessons from the inn’s proprietor.

“The allure of nature could have remained lost on me if it had not been for what I experienced on Yakushima,” recalled Haruyama, now 41, founder and chief executive of Yamap Inc.

After graduating from the university, Haruyama chose not to enter the workforce and went to Alaska, as if following in the footsteps of the late Michio Hoshino (1952-1996), a photographer he admires and respects.

He studied at the University of Alaska Fairbanks. When he went out to hunt seals with indigenous Inuit people, he was surprised to learn they were using state-of-the-art GPS devices.

“They made no distinction between their tradition and cutting-edge technologies so long as they are useful in saving their lives,” he said. “I was impressed by that sound approach they had toward tools.”

In March 2011, Haruyama was shocked by the Great East Japan Earthquake, tsunami and the Fukushima nuclear disaster.

“I felt the tragedy was a consequence of the disconnection between humans and nature,” said Haruyama, who was 30 at the time. “I thought I would have regrets later in my life unless I did something that would positively impact society.”

Only he had no idea what that “something” was.

One day in the spring of that year, he went hiking in the Kuju Mountain Range in Oita Prefecture.

A chill ran down his spine when he opened his smartphone to find how a blue point, which indicated his location, kept moving on a screen that was entirely blank because there was no cellphone signal.

“That was the moment when the experiences I had gained during my 20s all came together,” he said.

“I thought that if smartphones could be used as GPS devices for mountaineering, that would help reduce the number of climbers being stranded and could also reconnect urbanites with nature via an app. That’s when I made up my mind to set up a business.”

Haruyama’s business plan faced opposition from investors. One said just paper maps and a compass would suffice, while another warned that the potential market was too small.

He defied those skeptics in launching Yamap services all alone in March 2013, partly relying on funds advanced by his father and partly tapping into his own savings.

Yamap Inc., based in Fukuoka’s Hakata Ward, now has a payroll of about 90 workers.

“I have never even once embraced a desire to be a company president or earn tens of billions of yen,” said Haruyama, a native of Kasuga, Fukuoka Prefecture.

Yamap, a portmanteau word, combines “yama,” the Japanese for mountains, and the English word “map.”

Users also love the app’s community features, where they can upload their mountaineering records and share tips.

Yamap is now evolving well outside the smartphone screen.

The app operator offers a point system that can be used to keep mountain trails in good repair and also has programs for working with other businesses and local governments to develop regional communities.

Haruyama quoted words of Kazuo Inamori, founder of electronics manufacturer Kyocera Corp. and a predecessor of telecommunications carrier KDDI Corp.: “I ask myself if my motivation is out of good will and selfless.”

“Always keeping this question in mind, I will do my best to work on projects for connecting people with the mountains,” he said.