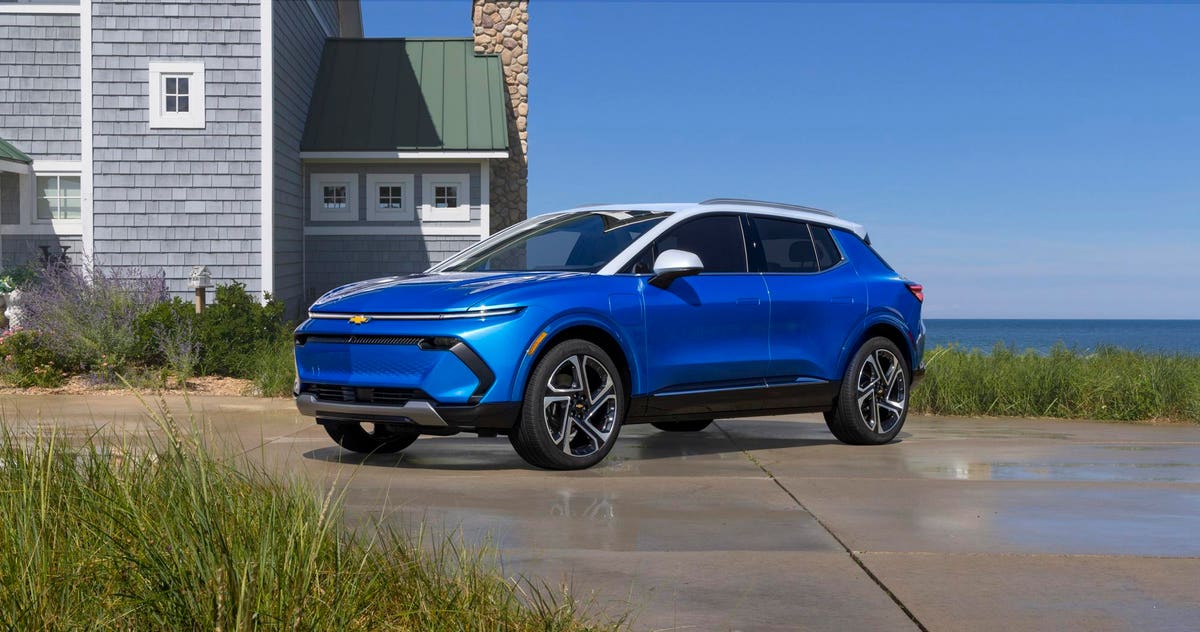 The Silverado, Equinox and Blazer are three of Chevrolet’s best selling nameplates in three of the strongest market segments in the U.S. If all goes according to plan, (and when hasn’t that happened recently?) by the end of 2023, all three badges should be available on battery electric equivalents. The Silverado EV was unveiled in January 2022 and the Blazer EV was shown in July. Just ahead of the 2022 Detroit Auto Show, Chevrolet is taking the wraps of the third member of its triumvirate, the Equinox EV.

The Equinox EV is in many respects the most important of this trio because of where it fits in the Chevy lineup and its expected pricing. Full-size pickup trucks are the best selling vehicles in America but they have also gotten significantly more expensive in recent years, with the new electric versions being particularly pricey. Ford just raised prices on the F-150 Lightning by up to $8,000 due to rising material costs for batteries and the GMC Hummer EV jumped by $6,250 in June of this year. Final pricing isn’t available yet for the Silverado EV, but it will probably be at least as expensive.

On the other hand, Chevrolet slashed prices on the Bolt EV and EUV by about $6,000 partly to revive sales after the recent battery recall and also in anticipation of the Equinox coming next year. For some time now, GM executives including CEO Mary Barra have been touting that the Equinox EV will start at just $30,000 not including any incentives.

Assuming that Chevrolet can actually hit that price point, that would put the starting price of the Equinox EV at least $10,000 less than many similarly sized competitors like the Toyota bZ4X and Hyundai Ioniq 5. The base 2023 Volkswagen ID4 now starts at $37,500 but only has 208 miles of range compared to the projected 250-mile base of the Equinox.

So what exactly is Chevrolet offering for what may be its most mainstream EV? It looks like it could be quite a lot, although Chevrolet officials are still being quiet on a lot of details. Chevrolet designers and engineers are leveraging the new dedicated electric platform to expand the passenger volume of the Equinox although it’s unclear by exactly how much. In profile, the windshield has clearly been pushed forward and the wheels are pushed to the corners. The wheelbase of the Equinox EV is 9-inches longer than the gas version and the overall length has been extended by 7.4-inches. That makes it only about an inch shorter than the current gas-engined Blazer. It’s also 2.8-inches wider and 1.9-inches lower. The result is somewhat more car-like, dare we say station wagon like proportions.

Chevrolet isn’t revealing what the passenger volume is now, but it will likely exceed the 104 cubic feet of the current edition. Interestingly, the maximum cargo area with the seats folded flat is actually decreased 63.9 cubic feet to 57.2 cubic feet. We’ll have to wait until we get a close up in person look to judge where the space has gone although the nearly two-inch lower roofline undoubtedly consumed much of that volume.

Overall, the look is more athletic than the gas model but aerodynamics has played an important role in shaping this new model. Aero is critical for an EV because the aerodynamic drag force increases as a square function of the velocity (for the non-math nerds out there it goes up exponentially with speed) which is why range starts to drop off significantly at greater highway speeds.

Conversely, when you lift off the accelerator, you don’t want aero drag to slow the vehicle down so as much energy as possible can be recovered through regenerative braking. To that end, the Equinox has features like flush door handles and careful detailing all around to smooth the flow of air.

Inside, the Equinox shares a lot of DNA with its bigger sibling, the Blazer EV. This starts with the 11-inch instrument cluster display and the available 17.7-inch center infotainment touchscreen. The big screen is standard on the 3LT and 3RS trims and optional on the 2LT and 2RS. The base configuration has a still ample 11-inch touchscreen all of which use GM’s new Android Automotive-based system with a suite of built-in Google services. At the outer ends of the instrument panel are the same circular vents found on the Blazer while the center vents are rectangular. A row of physical climate control switches sits just below the vents.

One available feature not available on any of its current competitors is Super Cruise, GM’s hands-free driver assist system. Like other Super Cruise applications, this retains the steering wheel light bar, infrared driver monitor system and will be available to use on more than 400,000 miles of roads in North America. It is not however, self-driving and neither is any other system on the market regardless of how the company may brand it.

Under the body, the Equinox is using various components from the Ultium toolset including motors, power electronics and battery modules. The Equinox will be offered with front or all-wheel-drive configurations and two battery sizes. Given the expected range of 250 miles for the base FWD variant, this likely contains a battery pack with eight modules that should add up to somewhere between 67 and 70 kWh. The extended range version probably has a ten-module pack with about 83-85 kWh.

All Equinox configurations get the same 210-hp, 242 lb-ft permanent magnet motor used on the front axle of the Blazer. AWD variants add what is probably the AC induction motor that GM has previously mentioned to bring the totals to 290-hp and 346 lb-ft. For now at least, Chevrolet isn’t saying anything about an SS variant like the Blazer has, but the beauty of an electric architecture like this is that it can easily be added by swapping in other motors from the Ultium family.

A new feature that GM is discussing for the first time in the context of the Equinox EV is vehicle to load (V2L) capability. The top 3RS trim level will be available with an optional 19.2-kW bidirectional on-board charger. With an 80-amp wall charger at home, this one can add 51 miles of charge per hour. However, it will also be able to put out up to 3kW of power for other devices. For now Chevrolet isn’t providing any other details such as if an adapter with an AC outlet will be required similar to the V2L system offered by Hyundai and Kia. While GM officials declined to confirm if this capability will be available on its other EVs, it seems likely that at least those with the 19.2-kW charger will be able to provide power.

Other Equinox variants will come with a standard 11.5-kW charger that can add up to 34 miles of range per hour. They will also support 150-kW DC fast charging which is rapidly becoming the minimum standard for new EVs. That’s almost three times the charging speed of the Bolt EV although not as fast as the 240-kW available from the Hyundai-Kia EVs.

The Equinox EV will be produced starting in fall 2023 at GM’s Ramos Arizpe, Mexico plant alongside the Blazer EV. GM plans to start with the 3RS trim for which no pricing is available yet and plans to make all trims available within 12 months of launch. That means a $30,000 Equinox EV probably won’t be offered until sometime well into 2024, by which time, GM hopes that supply chain challenges will be more sorted out. If GM really wants to be a leader in bringing EVs to the mainstream, they will want to make as many affordable Equinox EVs available as soon as possible.