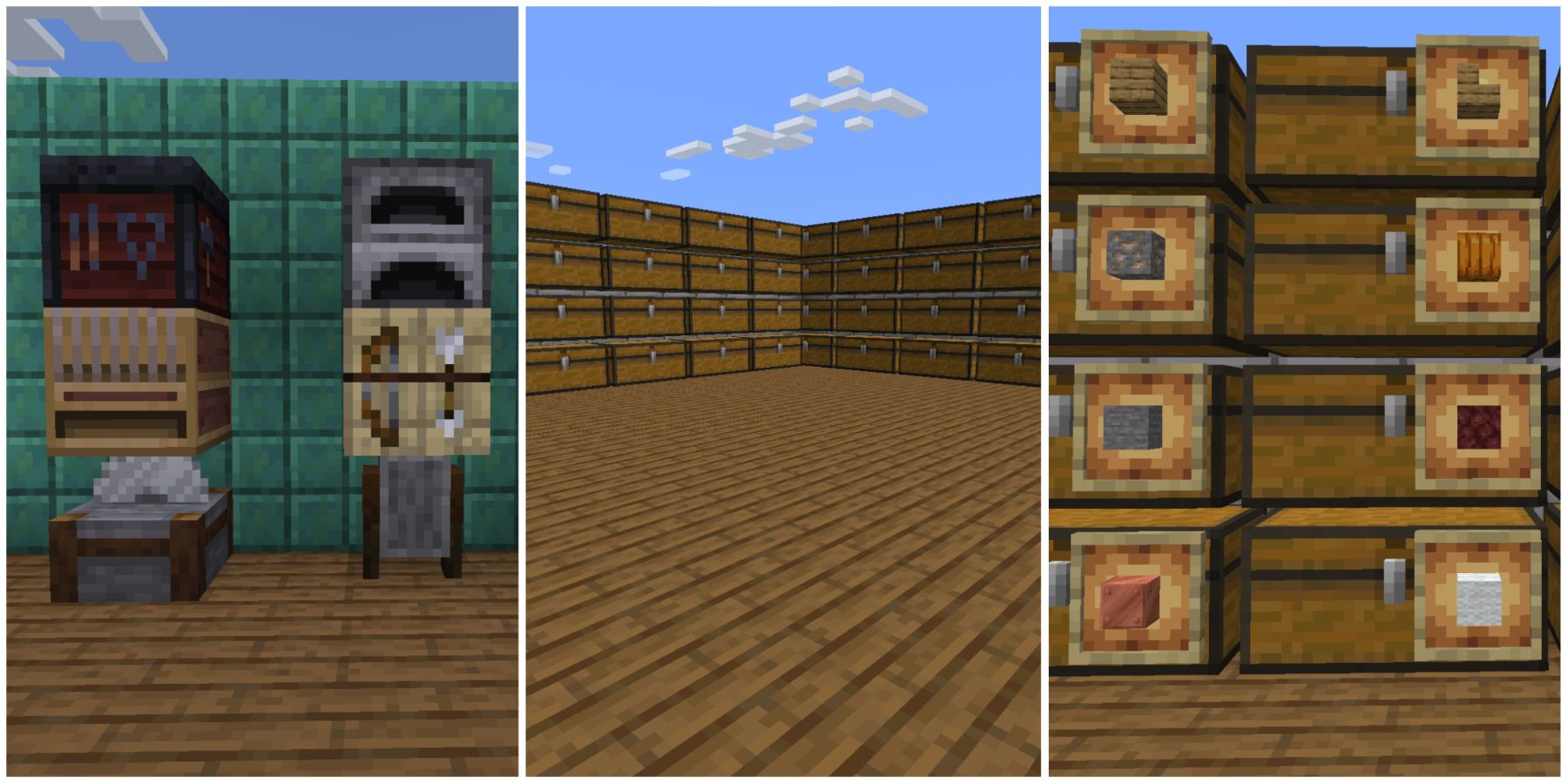 Post Views: 42
Android – There is so much to collect in Minecraft, from blocks that will be used to create a dream house to items need for crafting necessary tools. Because of this, there is not enough room in a player’s inventory to carry everything that can be collected while wandering the open world.

RELATED: Minecraft: Things To Do If You’re Bored

Luckily, when players settle down in their own Minecraft house, they can make an entire room dedicated to keeping all of their items nice and organized. However, building a storage room isn’t as easy as it sounds, so there are a few things to keep in mind when building a space for all the precious belongings.

7 Have A Lot Of Space For Chests

When playing in a world for a long time, there will be plenty of resources that will be collected over time that old chest setups in a home are going to fill up and then there will be a necessity to expand just to fit a couple more items in. To save some trouble, a storage room should be pretty substantial.

It is ok to craft a ton of chests, even if they are going to stand empty for a while. It is more likely than not that they are going to be needed in the future. In the early days of a storage room, putting everything in one chest and then slowly sorting items into the various empty chests will be that much easier.

A storage room is nice to have on hand, but considering the likelihood that very rare and valuable things will be placed in there, it should be protected significantly. If playing on a single player world, it shouldn’t be too big of a deal. The best thing to do is light up the place so no mobs spawn and possibly putting a door that mobs can’t get through easily.

Multiplayer worlds are a bit more tricky. Using redstone might be a good way to keep players out, especially in a world where protected plots disable outside individuals from using a contraption. If that’s not the case, hide the room behind walls so it is not quickly found and potentially raided.

Keeping track of where all the items are can be a real challenge, but a storage room gives players the opportunity to set chests up in a way that they know where to look when looking for a specific item. Because it would be a lot to dedicate one chest to just one item, it may be smart to section by type.

For example, players can create a corner of chests that are just dedicated to building blocks while another corner is just dedicated to different plants. It may be tempting to dedicate a chest just to diamonds, but if players don’t find enough to fill a double chest, maybe it might be the best to have a chest dedicated to ores instead.

With structuring a storage room in a specific way, players can try to plan out what items will go in what areas. However, there is always a chance that even after dedicating so much time to sorting, players are not going to remember where an item ended up.

RELATED: Best Minecraft Seeds To Start A World In

The easiest way to solve this issue is by adding a label to a chest or series of chests. However, signs don’t really stand out unless players add a font color. An easier way to label containers is by placing an item frame on or above them. This way, players can display an item that may be in the chest, helping them notice immediately where they should look.

Even with any warnings that building a giant storage room is necessary, it’s hard to prepare for the sheer amount of items that can be collected in a short amount of time. And after a while, it could be annoying dealing with storage in one room.

A way to consolidate a ton of items is by acquiring Shulker Shells from The End to make a Shulker Box. These boxes have as much room as a single chest and can be placed inside other chests. It can even go on the go with the player, which is good when attempting to build something away from the storage room.

While storage boxes are going to be at the core of a storage room, there are a handful of other blocks that players should think about putting in there. This includes utility blocks like a crafting bench, a loom, a smithing table, and more.

RELATED: Minecraft: Facts About The Game That Every Fan And Newcomer Should Know About

Not only are all these useful tools for existing in the game, but they are also useful when trying to consolidate items into chests. Crafting and combining objects will clear room in a storage, and players don’t have to worry about keeping newly made items in their inventory with the storage readily available.

1 Use Redstone To Create An Auto-Sorter

Organizing can be soothing for some and frustrating for others. But those who have a background in producing redstone contraptions might want to look into building an automatic item sorter. These systems tend to involve lots of hoppers as they transport blocks.

Generally, a single sorter is easy to make but building it for an entire storage room can get a little difficult. It may work best when making sorter systems for specific sections of the room, meaning players will still need to place items in their proper category. It is worth using online resources to discover what item sorter works best for the situation.