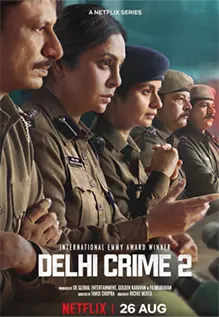 Ad P
Story: DCP Vartika Chaturvedi (Shefali Shah) of Delhi Police and her able team of officers, spring into action after the capital is terrorised by a series of violent attacks and gruesome killings of senior citizens. All evidence points to the notorious Kachcha Baniyan gang who were last active in the 90’s. Are the killers amateurs or seasoned criminals? Review: On a ticking time bomb, Delhi police must nab the killers before more senior citizens in gated communities are targeted. They must also tackle massive public scrutiny, media interference, personal battles, corrupt system and hierarchical pressures. Does courage come at a price?

There’s so much more to Delhi Crime than a bunch of police officers solving heinous crimes. The series is an outstanding seesaw of emotions; a nuanced portrayal of conflict. People are torn between their professional and personal lives, outrage and restraint, facts and judgement. When do you unleash the anger within you and when do you swallow it? Should you trust your instinct or go with the evidence? Through its voice of reason, a thinking protagonist Vartika, you reflect upon life and its hurdles.

On par with the much acclaimed previous season created by Richie Mehta, DC2 is a gritty and immersive police procedural that views crime from a wider lens. Bigotry and police brutality in the form of caste and class discrimination are openly condemned. The show doesn’t solely address the sensational crimes inspired by true events but also studies the intricacies of human behaviour. Domestic battles aren’t swept under the carpet.

American filmmaker Tanuj Chopra takes over the reins as a director from Richie and doesn’t miss a beat. He keeps the sensibility American (non-dramatic), heart Indian and retains the pulse of the series while recreating the unnerving tension. Taking off from the previous season, his storytelling allows each character a natural progression and voice. There’s an unsaid ease between people, synchronized disputes as guards are dropped following the passage of time. The best scene of the series sees Vartika and her subordinate Bhupinder (Rajesh Tailang) concerned over Delhi’s growing crime rate and suddenly switching to their lack of work-life balance. They inquire about each other’s families briefly, before switching back to the case details. Time doesn’t permit them even a moment of calm and digression.

Based on a chapter from former Commissioner of Delhi Police, Neeraj Kumar’s book, season 2 takes us back into the dark alleys and criminal underbelly of Delhi. While the violence isn’t suppressed, the gaze is more sensitive than exploitative. The angst is towards the crime, not the criminal. The handheld camera movement (by DOP David Bolen) in chase sequences shot at night and music by Ceiri Torjussen add to the atmospherics. An effective production design along with hard-hitting dialogue by Sanyuktha Chawla and Virat Basoya set the pace from the get-go. Writing by Mayank Tewari and co-writer Ensia Mirza is interesting. It makes you watch these cops from afar as well as become a part of the investigation.

Along with scoring high on technique and creative, what sets Delhi Crime apart is its acting weightage. This is ‘Madam Sir’ Shefali Shah’s strongest performance and one of the finest written and acted female characters in cinema or series. Vulnerable and powerful in equal measure, Shefali’s brooding and teary eyes, dark circles, silent storm brewing in the head, commanding walk… they all tell a story. She sets boundaries as a police chief within her team and outside. Her role expects her to juggle between being kind and ensuring she’s not taken for granted. The actress strikes a fine balance between the two. Rajesh Tailang, Rasika Dugal, Sidharth Bhardwaj, Gopal Datt, Adil Hussain and Anurag Arora carry forward their well-rounded characters and are as integral to the plot as Shefali. Tillotama Shome and Jatin Goswami are exceptional in their unhinged characters.

The mainstream Bollywood boys club and their cop universe is fairly entertaining but Vartika Chaturvedi is the hero we need. She’s dignified, brave, and socially aware. Brand DC is not popcorn entertainment. It’s the real deal.