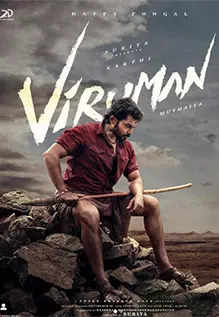 Viruman Movie Synopsis: An intrepid and good-hearted son fights to make his arrogant father pay the price for his sins, which includes his mother’s death, and save his brothers from the man’s grip.Viruman Movie Review: With Viruman, director Muthiah is back with yet another action drama set in the hinterlands of south Tamil Nadu. This time, he choses to centre his plot around the relationship between a father and his son. The film begins with a boy chasing his father, Muthupandi (Prakash Raj), a tahsildar, with a knife in hand. We learn that the man is responsible for the death of his wife (Saranya Ponvannan), which is why the son is in a murderous rage, and doesn’t even want to live with him. And years later, as a young man, Viruman (Karthi, who effortlessly steps into a role that’s more like a Paruthiveeran Lite ) is keen on making his father pay.

On the surface, the story of Viruman does possess the tension needed for an emotional drama, but Muthiah’s generic writing never lets the film from being anything more than something that’s barely watchable. The screenplay is not only formulaic, but also conveniently written that we are able to predict plot developments even when they are a mile away. Every time a conflict shows promise of lending some edge to this familiar tale, Muthiah resolves it in the next few scenes. Take the initial scenes with the female lead, Thaenu (Aditi Shankar, making a confident debut). She is shown as someone who is affectionate towards Muthupandi, even though he is a man who is hard to like. We think this equation between them would pose a challenge to Viruman, who has fallen for her and wants to marry her, but in just a couple of scenes, we see the character shifting her allegiance, thanks to a convenient plot development. A sub-plot involving friction between Viruman and a MLA (GM Sundar) is also resolved in similarly easy manner.

The portions that work are mainly due to the actors, who infuse one-dimensionally written characters with flesh and blood. Like Prakash Raj, who makes us see past Muniyandi’s negative qualities and turns him into someone who could be given a chance at redemption, especially in the final portions. Raj Kiran and Karunas lend respectability to purely functional roles while Soori manages to crack a few one-liners that hit their spot and make us smile. On the technical side, there is basic proficiency, but even these feel generic – Selvakumar SK’s visuals have the oft-seen colour palette found in contemporary rural films while Yuvan Shankar Raja contributes with a couple of catchy songs and a score that just about works.