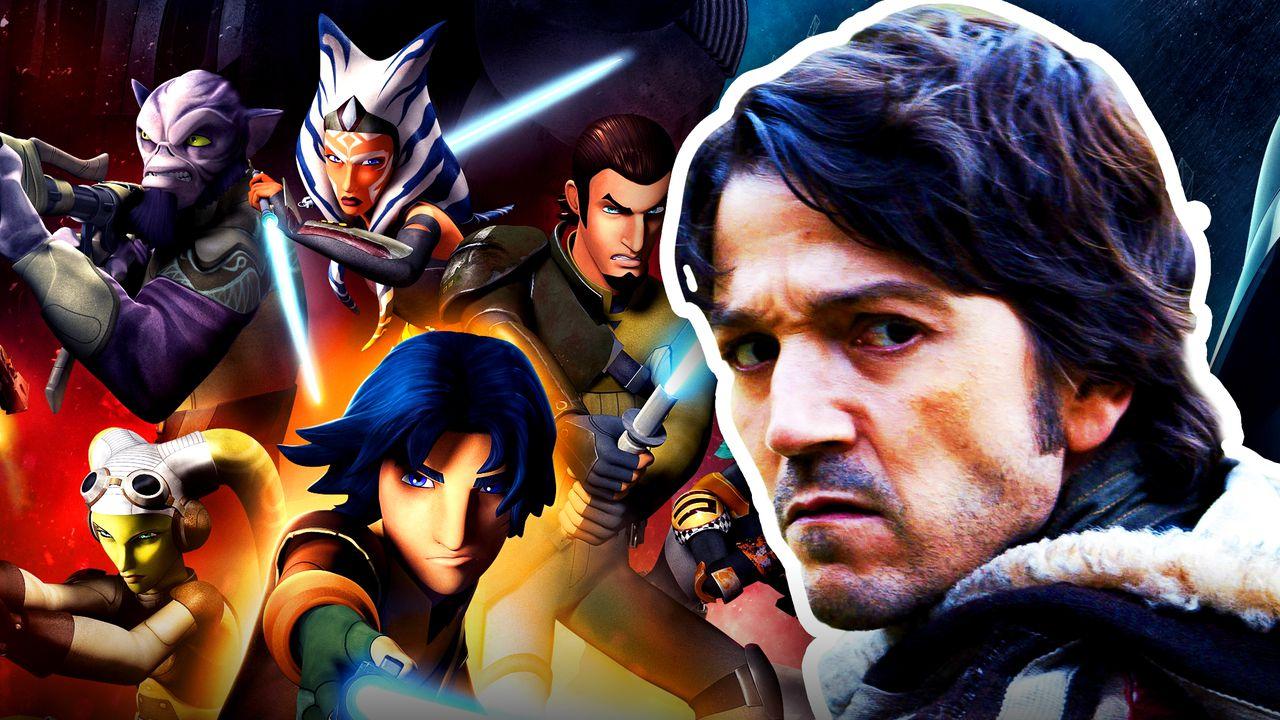 Ad P
The rebellion era in the galaxy far, far away has never been more popular. Ever since Star Wars: Rebels began airing in 2014, Lucasfilm has consistently found new avenues to explore in the 19 years between Revenge of the Sith and A New Hope. Coming off the heels of Obi-Wan Kenobi­, which featured seeds of revolution against the Empire, Star Wars: Andor looks to continue this trend.

Six years after Rogue One: A Star Wars Story graced the silver screen, fans will finally get to see a prequel story about one of the movie’s main protagonists: Cassian Andor. Tony Gilroy, who co-wrote Rogue One, is back to serve as a writer, director, and showrunner for the series.

Not only does the show look to expand upon Andor’s refugee backstory, but it seems to be telling a grander story about the origin of the Rebel Alliance as a whole and the Empire’s iron grip on the galaxy. While audiences saw pieces of this story in Rebels, it was mainly from the perspective of one rebel pocket. Andor, on the other hand, seems the delving into the centerpieces that bring the Alliance together.

Besides ending with some disappointing news, Andor’s official trailer wowed viewers with breathtaking visuals and new locations. On top of that, it offered an intriguing look at the show’s lead characters, one of whom may be the source of a potential continuity issue.

Among the new and familiar faces in the Star Wars: Andor trailer was one rebel extremist, Saw Gerrera, played by Forest Whitaker. General audiences were introduced to this character in Rogue One, but hardcore fans had previously seen this insurgent in Season 5 of The Clone Wars.

In this four-episode arc, taking place in 20 BBY (Before the Battle of Yavin), Saw and his band of rebels sought to defeat Separatist forces on their home planet of Onderon. With guidance from Jedi and the Republic, they were successful in restoring freedom to Onderon. It came at a cost, however, as Saw tragically lost his sister during the fight.

The next time the character appeared was in 2016’s Rogue One, which occurs in 0 BBY. Fans learned that Gerrera once fought with the Alliance, but eventually broke from the group since they did not share his militant views.

In the film, Saw has a mechanical leg and struggles to breathe because of his damaged lungs. His disheveled appearance and fractured mind exemplify the toll his persistent fighting has had on him. Since the movie’s release, Lucasfilm has elaborated on Gerrera’s activities in those 20 years between The Clone Wars and Rogue One.

The freedom fighter has made cameos in projects like Jedi: Fallen Order and The Bad Batch, where his rebellious efforts remain constant. But his biggest role, and one closely tied to Andor, was in Rebels.

Gerrera first appeared in the animated series in Season 3’s two-part midseason premiere, “Ghosts of Geonosis.” These episodes take place in 2 BBY (about two years before Rogue One). At this point, Saw is still a member of the Alliance, though his radical tendencies are still evident.

Saw’s visual depiction in these episodes is very similar to how he looked in Rogue One’s opening flashback sequence. He possesses a cleaner look, with a bald head and a less scraggly beard. Additionally, he has each of his limbs and requires no assistance to breathe. Because of this, he’s able to take part in more of the action with a lively spirit.

Gerrera plays one final role in Rebels’ Season 4 two-episode arc titled “In the Name of Rebellion,” which occurs in 1 BBY. Only a year after “Ghosts of Geonosis,” Saw has officially broken from the Alliance, calling the Rebellion weak and indecisive.

Here, his representation is more similar to how he looks in Rogue One. His dark, gray hair and beard are grown out, but he has still not lost his leg and doesn’t sport a breathing apparatus.

Furthermore, the burden of war and the threat of Imperial spies haunt Gerrera in Rogue One. Consequently, he’s not as mentally fit as he once was during the events of Rebels. But why does all of this matter?

Season 1 of Andor is set 5 BBY, which means it transpires two years before Saw Gerrera first appears in Star Wars Rebels Season 3 and five years before Rogue One. Thus, chronologically, Gerrera’s physical features should resemble his design in Season 3 of Rebels, where he’s much more kempt. However, the extremely brief image of Saw in the Andor official trailer is more akin to his film depiction and his design in Rebels Season 4.

Based on the trailer, it’s unclear whether or not the insurgent is limping on a mechanical leg. Therefore, it’s not fair to speculate on the subject. Still, one worry that could arise in some sects of the fandom is how Saw Gerrera will be characterized in Andor and if this will fit within the current canon established in other projects.

Tony Gilroy, who has classified himself as not being a “fan fan” of Star Wars, recently spoke about canon challenges and how Andor handles the lore. Gilroy is well aware of the variety of canon that exists in the franchise, and he’s noted how the team worked with Pablo Hidalgo, Star Wars Lore Advisor.

Moreover, Gilroy has made a point that the show does not reverse canon, but instead will offer fans a new perspective on the characters. Conversely, he has also stated that there may be some cases where, “what you know, what you’ve been told, what’s on Wookieepedia…is really all wrong.”

In the past, Lucasfilm has recontextualized certain events throughout Star Wars history. Sometimes, this is for story purposes; other times, it’s for practical purposes.

Andor could be another case of recontextualization. With how closely tied Gilroy is to Rogue One, along with his determination to tell a unique Star Wars story, what fans know about Saw Gerrera during this time might get deconstructed.

Gilroy may add certain details of the character’s relationship to the Rebellion that were previously unknown. He may also tweak the existing canon established by Rebels to connect it more with Rogue One.

If the goal is to line up with the current canon, Saw Gerrera should be livelier than he was in Rogue One. He won’t just be an intimidating presence to confront. Instead, he would be in the fight with his fellow comrades and leading on the battlefield.

Additionally, he shouldn’t be as radical as he is in Season 4 of Rebels or Rogue One. Although, his lean toward extremism can still be explored in how it conflicts with other rebels and their values.

And let’s be clear: Andor still has a great chance of both not breaking canon and even connecting it on a deeper level. In Star Wars Rebels, Captain Rex talks about how Saw created his own rebel cell before joining the Alliance. This could be exactly what’s happening in the Andor trailer, as Stellan Skarsgård’s Luthen Rael could be looking to recruit Saw’s group into a greater cause.

Still, fans of these beloved franchises tend to get frustrated when things don’t line up within the universe or certain projects get retconned. Some will completely dismiss projects that they deem don’t make sense in the overall canon.

But Star Wars has never truly been about canon. Continuity was not a building block of this universe. George Lucas was inspired by mythology, lore, legends, and heroes.

With mythology comes different beliefs and interpretations. After all, it’s a big galaxy. So, not only do the creators of these Star Wars stories have varying perspectives on the franchise but the world itself is filled with contrasting points of view.

In the last couple of years, Dave Filoni has made a point to embrace the differences between visual mediums and continue the trend of non-linear storytelling in Star Wars. It gives way to more creative possibilities. All that being said, Lucasfilm will continue its efforts to preserve the overarching lore of Star Wars.

Not nearly enough footage has been seen of Saw Gerrera in Andor to determine whether or not there will be a disconnect between this show and Star Wars Rebels. But the pertinent question remains – will Gerrera’s presence in the series make sense within the Star Wars timeline, or will it serve more so as a prequel to Rogue One?

Find out when Andor begins streaming on September 21 with a three-episode premiere on Disney+.