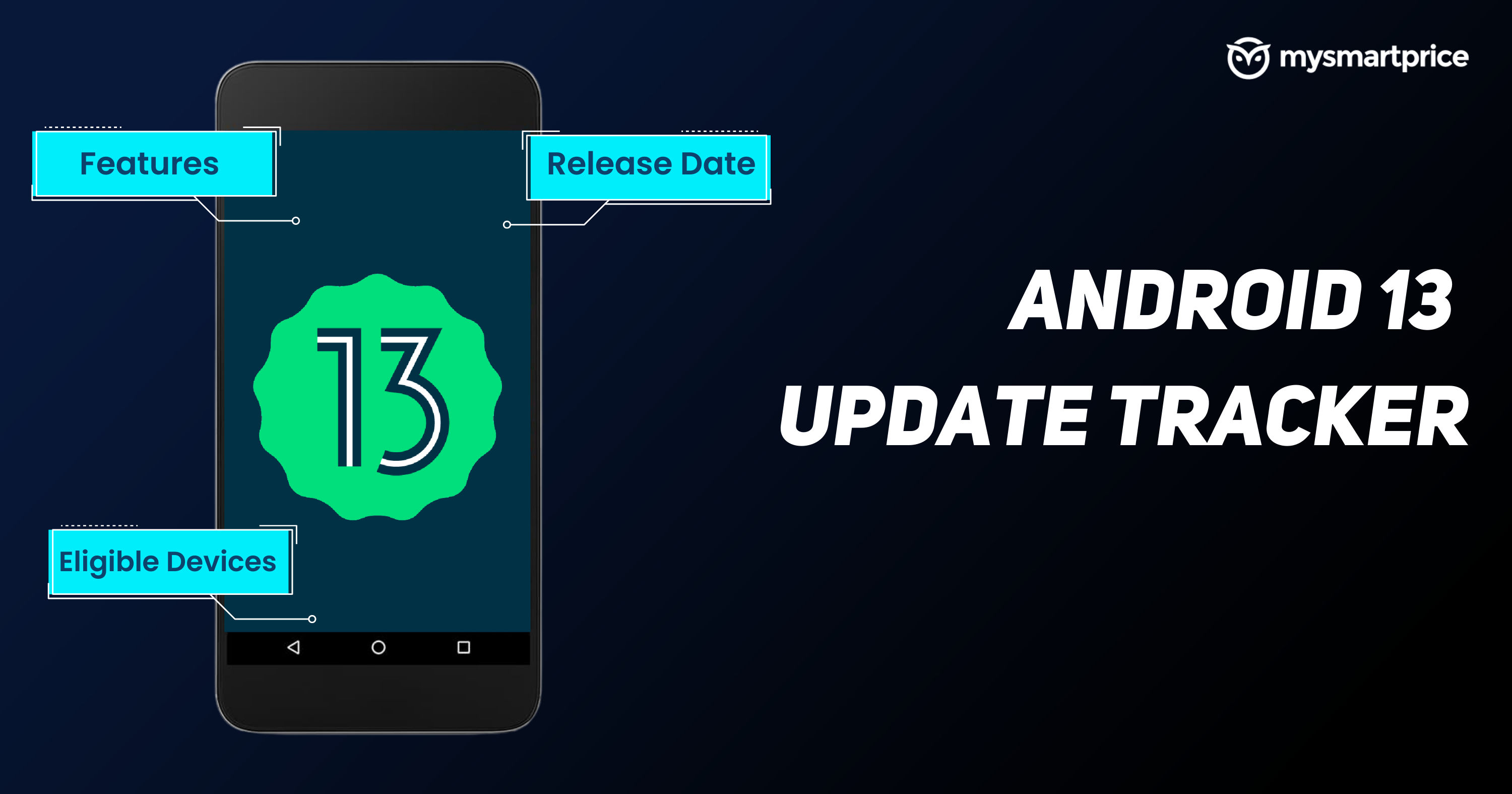 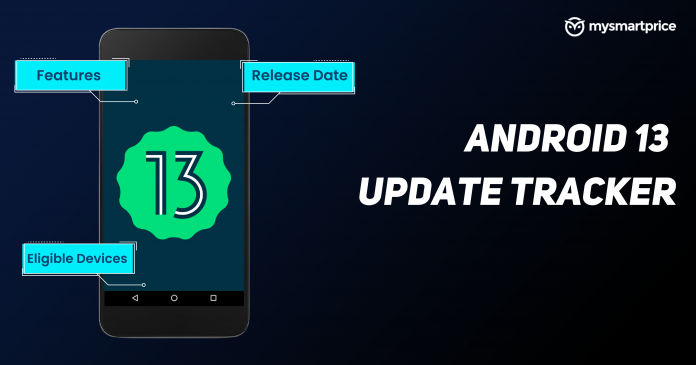 Android updates are always exciting as Google adds their latest bit of software innovations including new Google Assistant features, animations, themes, and many more under the hood changes. With many phones yet to receive the stable Android 12, Google has already announced Android 13 and in fact, the Android 13 Beta 1 was pushed recently.

Like always, Google first released the developer preview and then, and then three Beta updates are scheduled finally, once the system reaches stability, the stable Android 13 version will be released later in the year. As usual, the Google Pixel devices are the first set of phones to get the updates and once the Beta 2 is released, we can expect a few OEMs to come up with Android 13 for some of their phones. 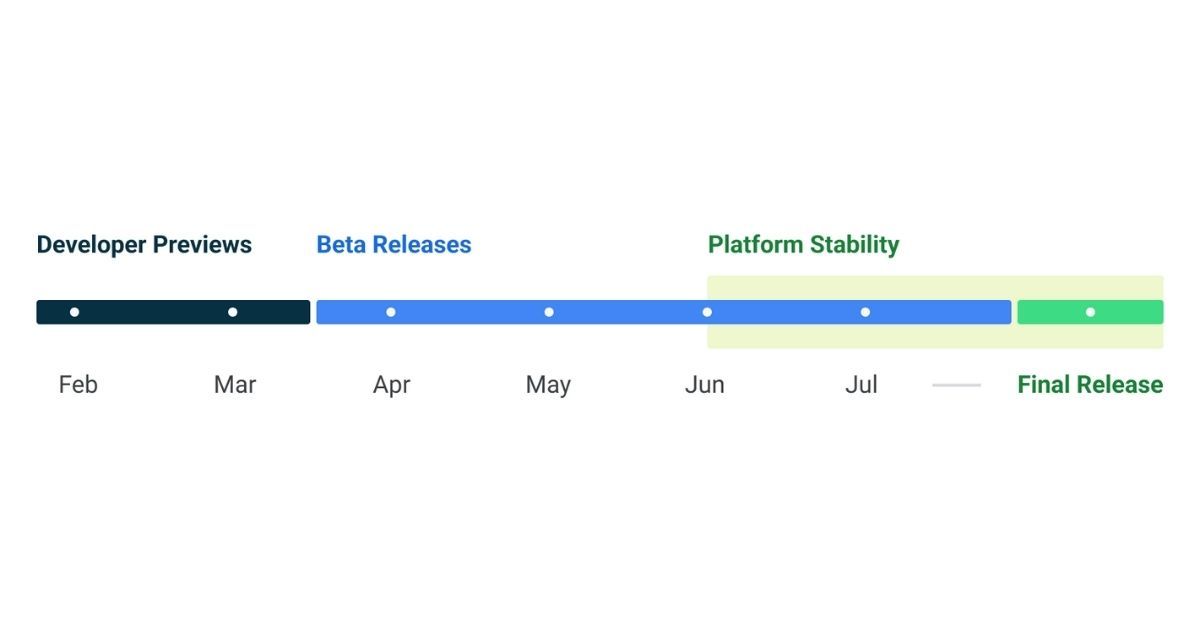 Google released the first developer preview of the Android 13 back in February and on April 26, the company dropped the first Android 13 Beta for Pixel devices. As per the original timeline shared by Google, the second beta is expected in May, which we can expect to happen at the Google I/O 2022. Beta 3 and 4 are scheduled for June and July release and once the platform reaches the stability phase, Google is expected to release the final and stable version of Android 13 in August 2022.

With Android 13, Google has focused more on privacy and security features, at least in the developer previews. There are also some visual changes and most of the other changes are happening under the hood, which are not visually available for users to see, but overall, Google is adding all the new features to improve the overall user experience and performance of the Android device. 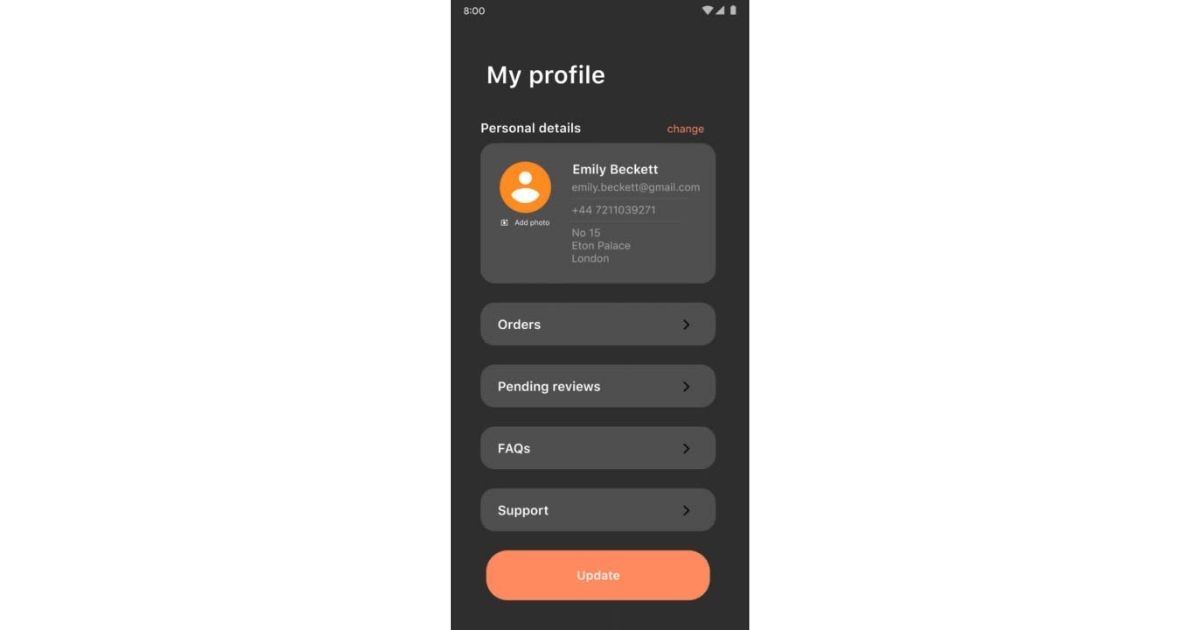 The new photo picker feature on Android 13 allows users to share photos and videos securely with other apps. The picker 13 will bring both local and cloud-based photos securely. Apps can use the photo picker APIs to access shared photos and videos without needing permission to view all media files on the device, which is a big win as you are noting giving any apps unnecessary access to all your media files.

The new version of vanilla Android brings new NEARBY_WIFI_DEVICES runtime permission. This permission will be required for apps that request commonly-used Wi-Fi APIs and enables apps to discover and connect to nearby devices over Wi-Fi without needing location permission. 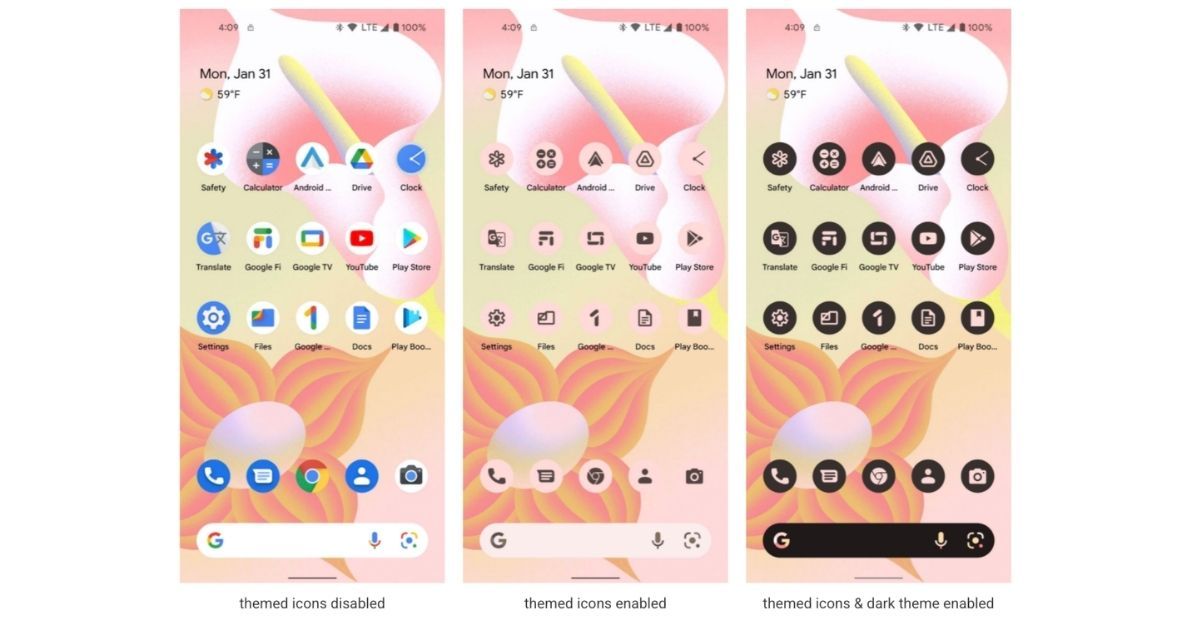 Google introduced the Material You Design, which is a system-wide theme engine on Android 12. With version 13, the company is expanding the Material You beyond Google’s app to all the icons, allowing users to opt into icons that inherit the tint of their wallpaper and other theme preferences. Developers can now add a monochromatic app icon and a tweak to the adaptive icon XML, so their app can adapt to the Material You theme.

Although this feature has been in the talks for a few years now, the feature was launched along with the first developer preview. With this functionality, you will be able to use an app in a particular language without affecting the global system language of any other app’s language. At the start, only a few select apps will come with this feature. This can come in handy for multilingual users. The settings can be accessed by heading to Settings > Apps > All apps > <select any app> > Language.

In Android 13, if you are the owner and you are setting up a guest profile, you will be allowed to choose which all apps can be installed on the guest profiles. The data between owner and guest users won’t be shared and in case the guest profile user has to use any apps, they will have to sign in.

App Drawer in the taskbar

With Android 12L, Google started prioritizing the Android experience on tablets and foldable as well. The taskbar was first found on Android 12L and version 13, if you happen to have a large screen device, this will be enabled by default and you will see six apps along with an app launcher.

Google has added a handy new clipboard tool. When you copy a text, link, or image, a clipboard overlay preview will appear on the bottom of the screen. The preview contains what you just copied and it also comes with an edit button, in case you want to quickly edit something. In case you copy an address, you will see Google Maps intent next to the edit button and the same also applies to phone numbers and links copied.

Tiles in the quick settings are the quickest way to access shortcuts. With Android 13, Google has added a few handy ones to the tiles. These include:

This should appear as Settings > Display > Screen resolution but it isn’t showing up yet. pic.twitter.com/tmRKQubMQv

While this feature is already present on many Android smartphones like OnePlus, Samsung, etc, Google is bringing the ability to change screen resolution with Android 13. This option can be accessed under Display settings. Users will be able to switch between QHD+ and FHD+ screen resolutions. 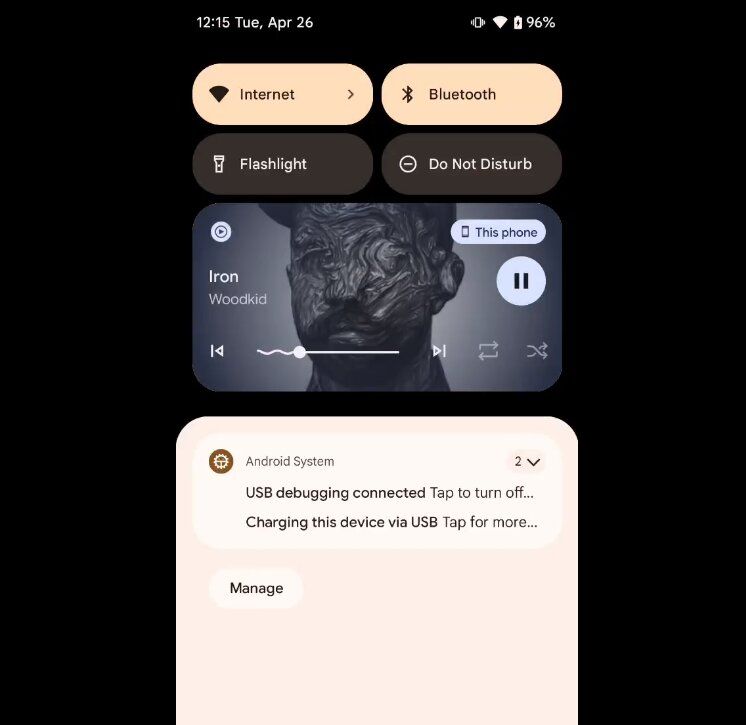 Yet another minor UI charge that comes as a part of Beta 1, the music player now supports a squiggly progress bar, instead of just a straight progress bar. The unplayed part of the media/ song stays straight, but the current playing media moves up and down like a waveform.

This feature has been announced as a part of Beta 2 and this is a new gesture for Android phones, tablets, and foldables. Once this feature is completely implemented, it will let users preview the destination or other result of a back gesture before they fully complete it, allowing them to decide whether to continue or stay in the current view.

For instance, using the predictive back gesture can display an animated preview of the Home screen behind your app. The final stable version of this feature will be available with the final release, users should be able to test this back-to-home animation by enabling a developer option. You can enable this feature by heading to Settings > System > Developer options and then selecting Predictive back animations.

With Beta 1, Google introduced Per-app Language support and with beta 2, developers will be now able to specify what languages the app supports in the res/xml/locales_config.xml, which allows users to choose languages on a per-app basis. Once the developers update this on their app, users can go to Settings > System > Languages & Input > App Languages > (select an app) and change the language.

With the new version of Android comes excitement for enthusiasts to try out the later OS that Google has to offer. As you’d expect Google Pixel devices are always the first to get Day 1 updates. However, many OEMs have started pushing out Beta updates quickly to their top smartphones in the past couple of years. We have compiled a list of phones that are expected to get Android 13 from all the major OEMs based on the brand’s promise and update life cycle.

Note: We will update the list as we get more confirmation from brands.

With Android 13 expected to release something later in August 2022, here are the latest news related to Android 13 from Google and other OEMs.

Google has started rolling out new features to its YouTube application to make it compatible with Android 13 features. The company has rolled out a new version 17.32.32 of YouTube for Android that comes with Android 13 media controls.

OnePlus has started rolling out a third Beta update for the Android 13 operating system. The new update comes with some bug fixes and stability improvements. Moreover, the brand has revealed that it will showcase Android 13 update during OnePlus 10T launch event. Meanwhile, here’s the complete changelog of the Android 13 3 Beta update:

Samsung might soon bring the Android 13 beta programme for its flagship smartphone, the Samsung Galaxy S22, pretty soon. As per a report by TizenHelp, Samsung has been reportedly working on an Android 13 beta update for the Galaxy S22 in South Korea. The beta update may come with version number S906NKSU2ZVF6.

HMD Global has revealed that its latest Nokia X20 is the first phone from the company that has got the Android 13 Developer Preview update. Users can enrol for the Developer Preview update by going to the My Device application and clicking on the Support banner. Users then need to go Android developer preview section and fill in the details to enrol for the Android 13 Developer Preview. Once accepted, users can go to Settings > About Phone > System Updates to download the latest version of Android. However, it is important to note that all the data will be wiped out before installing the developer preview, so it is important to back up the data before installing the new version.

Android 13-based OneUI 5.0 Could Arrive in May

Samsung has been very quick to update its devices in recent times and we’ve seen that with Android 12. The company is expected to announce the first Android 13 Beta in July and the final stable version of the update could rollout at the end of 2022.