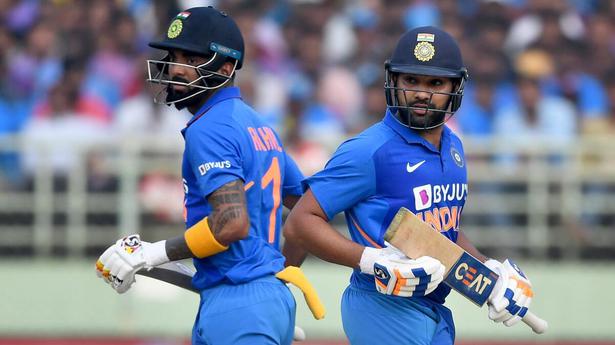 Ad P
India heads into the Asia Cup, starting August 27, on the back of a ‘fearless approach’ that has seen the team win 19 of its 24 T20Is since the end of the T20 World Cup in 2021. Much of India’s high-risk and high-reward approach in the shortest format of late has been attributed to aggressive batting in the PowerPlay, with the run rate touching 8.44 during this phase in 2022, compared to 7.87 in 2021.

There was a palpable shift in gears at the top in India’s first series after the T20 World Cup. India’s run rate in the PowerPlay against New Zealand in three T20Is in November 2021 was 9.44. The transformation has been partly led by skipper Rohit Sharma, who has scored at a strike rate of 147.82 in the PowerPlay this year.

While Rohit’s position as an opener is a near certainty, India has been forced to try different combinations at the top with players missing out due to injury or to manage their workload. India has experimented with nine different pairings since the end of last year’s T20 World Cup and three of those pairings include players who are part of the Asia Cup squad.

The Rohit and Rahul pairing is the most likely to open and heads into the tournament as India’s most prolific opening duo among current players. They have opened the innings in T20Is on 19 occasions, scoring 1050 runs at a run rate of 9.47, while averaging 55.26. However, owing to Rahul’s prolonged injury layoff, the duo has batted only twice since the end of the T20 World Cup, scoring 167 runs at 9.02. While Rohit seems to have adapted to India’s gung-ho approach, Rahul is yet to play a T20I in 2022. Rahul scored at a sluggish 103.57 in the PowerPlay in the Indian Premier League (IPL) this year.

Rohit and Suryakumar opened on four occasions in the recently concluded T20I series in West Indies this month and were in sync with the team’s template of going big from the first ball. In four innings, the duo struck 116 runs together at a blinding 10.21 per over. Rohit and Suryakumar also enjoyed individual strike rates in excess of 160 in the series. Given his ability to play all across the ground with his wrists of steel engineering innovative strokeplay, Suryakumar as an opener could be an option to explore with fielders inside the circle in the PowerPlay. 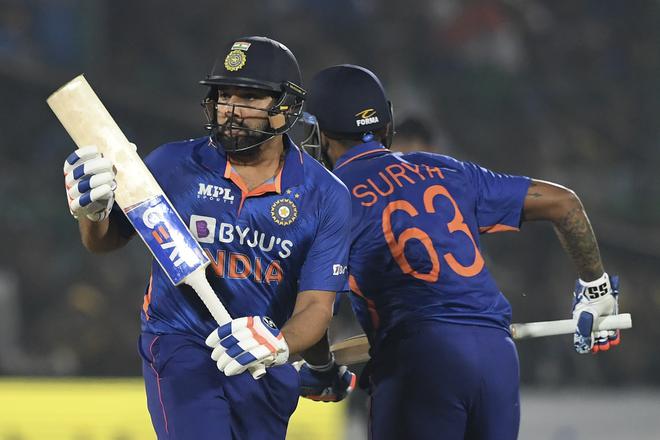 The right-hand left-hand opening combination of Rohit and Pant made its first appearance in the second T20I against England in July and made a strong first impression with a 49-run opening stand in 4.5 overs. The duo managed just two runs together in 1.1 overs in the following game, with Pant falling for 1 off five balls. However, with Hardik Pandya and Dinesh Karthik at No. 5 and 6, respectively, packing enough power in the death overs, Pant’s penchant for going aerial may be better utilised with just two fielders manning the boundaries in the PowerPlay. 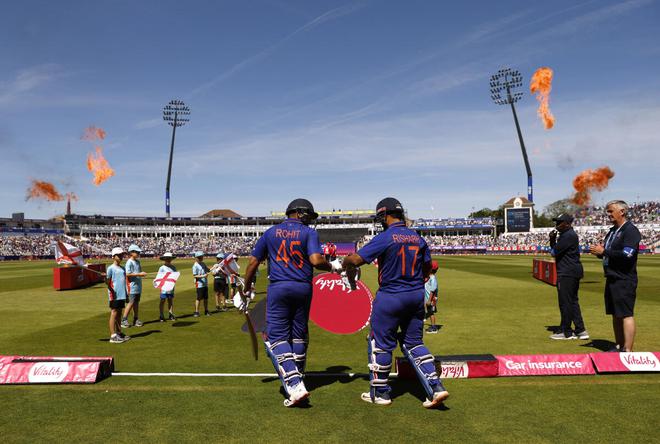 Rohit Sharma and Rishabh Pant stitched a quickfire 49-run stand in their first innings as an opening pair in the second T20I against England.
| Photo Credit: ACTION IMAGES VIA REUTERS

India’s most prolific opening combination since the T20 World Cup is that of Rohit Sharma and Ishan Kishan, which has scored 292 runs in six innings, while averaging 48.66 and striking at 9.31 runs an over. Ishan and Ruturaj Gaikwad have also opened the innings six times during this period, scoring 200 runs at a run rate of 8.45. India has tried five other opening pairs, on one occasion each.