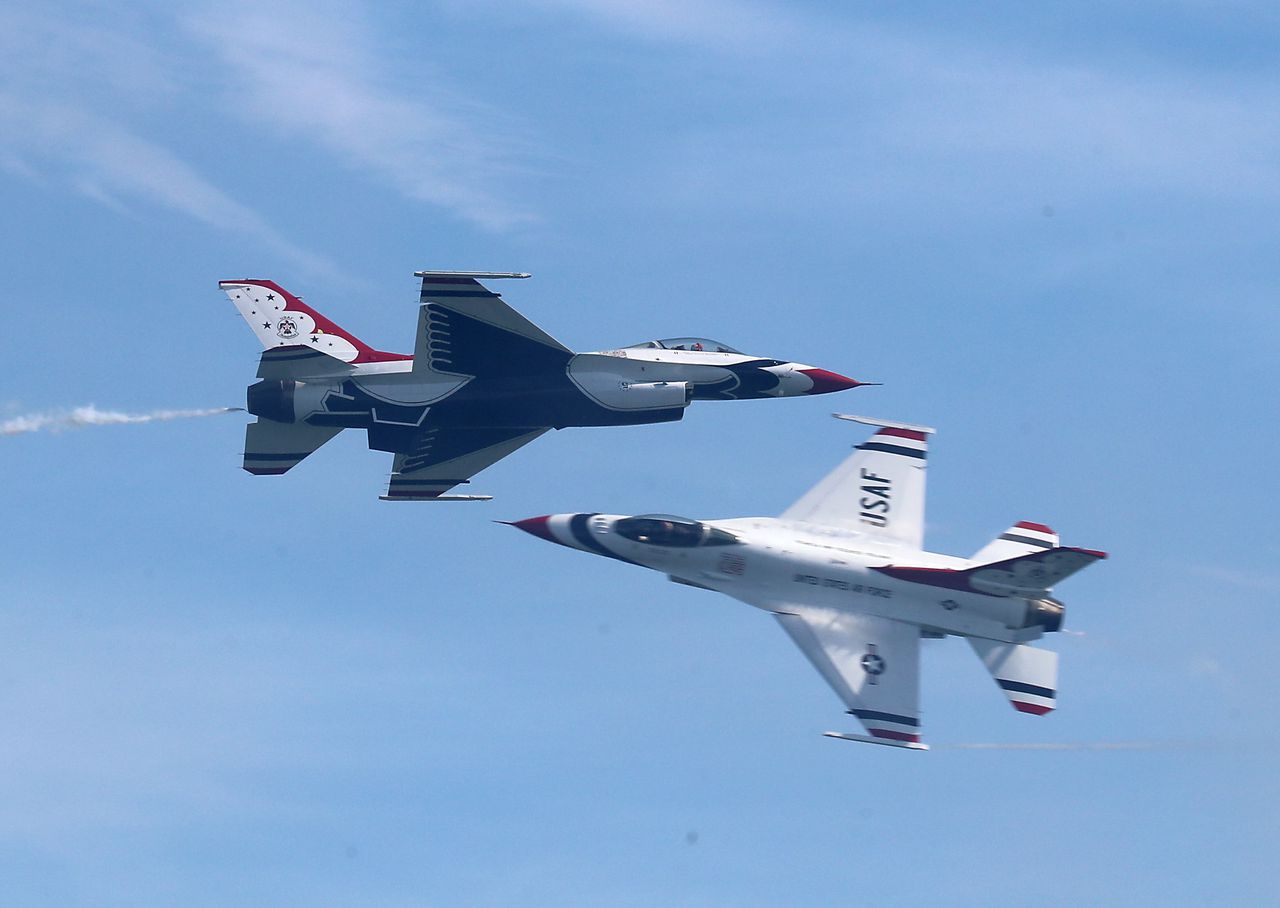 The Meet AC Atlantic City Airshow, “A Salute To Those Who Serve” returns to the skies Wednesday, featuring the U.S. Air Force Thunderbirds.

It’s been a busy few weeks for the city with tens of thousands of people converging on the beaches for three nights of music from the band Phish and three nights of country music with the Tidal Wave Music Festival.

That trend will continue when an expected 400,000 people flock to Atlantic City and the surrounding towns to witness more than four hours of aerial acrobatics.

“We’re the largest midweek air show in the country and I believe we’re the largest single-day event in the state,” said Michael Chait, Greater Atlantic City Chamber president, noting that the economic impact the free event brings to the city averages about 50 million.

This year’s show will have plenty of don’t-miss demonstrations with jets roaring along the shore.

“I hear a lot of people say it’s the sound of freedom,” said Chait.

Back after a few years’ absence is the F/A-18 Super Hornet Demonstration, which some spectators may recognize from a recent summer blockbuster movie, “Top Gun: Maverick.”

Missing this year will be the GEICO Skytypers and the Miss GEICO Power Boat. They will be replaced by a new demonstration team, Full Throttle, which according to Chait is the largest civilian aviation formation team in the country.

Former Skytyper, Chris Thomas will be on hand performing in an SNJ-2 aircraft.

For years, GEICO was a presenting sponsor, but when they pulled out of the airshow earlier this year, the event was in jeopardy of being canceled unless a new presenting or title sponsor was found.

“Meet AC stepped up and really saved the airshow,” said Chait, adding that they will be the title sponsor for the next two years.

The pride that goes along with the airshow will be featured in the scheduled 29 demonstrations.

“The pilots that are performing are the real Top Guns. They’re the elite of the elite,” said Chait.

Here is what you will need to know if you plan on heading down to watch the free show. The show will not be canceled in advance in case of the weather, but can be delayed.

The best viewing location will be on the Atlantic City Boardwalk and free beaches, specifically in front of Jim Whelan Boardwalk Hall where most of the action will take place. If that’s your choice, get there early because the real estate is taken up quickly.

Ocean-facing hotel rooms, if you can still reserve one, will also provide great views.

There are other viewing options if you want to avoid the crowds and the traffic going to and from Atlantic City including the Ventnor and Margate beaches and in Brigantine along the Absecon Inlet at the Cove and South Jetty area.

Premium locations are sold out including the Flightline Club on the beach, the VIP Watch Party at Boardwalk Hall, the viewing party at Bally’s Beach Bar and the rooftop viewing event at The Vue at the Claridge.

Know a friend with a boat? Now is the time to hit them up for a day out on the water. There will be a “no boat zone” so be mindful and respect the space.

If you want to catch a glimpse of some of the performers and avoid the crowds, then get down to AC a day early and watch the practice session which begins at approximately 11 a.m.

The airspace around Atlantic City will close at 11 a.m.

The United States Army Parachute Team, the Golden Knights, will kick off the day with a jump at 11:30 a.m. and the U. S. Air Force Thunderbirds will end the show with their performance beginning at about 3 p.m.

Parking is available at the casinos and throughout the city including Boardwalk Hall, the Convention Center, Ohio Avenue parking lot, the Wave Parking Garage, and the Stockton University Parking Garage.

When in town, the AC Jitney will take you around the city and is available 24 hours a day.

Don’t want to fight the traffic? Not a problem because NJ TRANSIT will have additional rail service and is offering half-priced train tickets in the NJ TRANSIT mobile app.

Customers using the promo code “AIRSHOW” can purchase up to two one-way Atlantic City Rail Line tickets at a 50% discount for the day of the airshow.

With the discount, the round-trip cost from Philadelphia to the airshow is $10.

Here is the complete list of performers and tentative times. Performing acts are all subject to change without notice.

It will be a long day on the beach and if it’s typical August weather it will be hot and humid. Below is a list of things you might want to bring to enhance your experience.

More than a dozen veteran resource organizations will be available from 10 a.m. to 3 p.m. to discuss services, support and jobs. They will be located on the Boardwalk between Bellevue and Florida avenues.

“When we first started Veteran Resource Row was to maximize the show’s ability to attract people to Atlantic City, specifically veterans,” said Chait.

Explore Atlantic City and avoid the traffic. Each casino offers a variety of dining options, but if you are full of sand and the casinos are not your thing, there are plenty of other local establishments just off the Boardwalk or bayside to check out for that bite to eat and a beverage of your choice.

Wander down to the Orange Loop, just off the Boardwalk. That includes Tennessee Avenue, St. James Place, and New York Avenues where there are a number of different eateries to choose from.

Tennessee Avenue Beer Hall offers a relaxed outdoor setting with fire pits with an extensive beer and food selection, or grab a seat indoors if you’ve had enough of the weather. Just down from the beer hall is Rhythm & Spirits, a restaurant that serves up inspired Italian food, pizza and cocktails. Seating is also available outdoors.

Follow your nose across the street to Bourre where the smell of smoked ribs, pork and brisket will make your mouth water. And of course there is the Atlantic City staple, the Irish Pub.

Two beer halls on the Boardwalk are another option.

The Biergarten Atlantic City, an open-air venue, is right on the Boardwalk in the shadows of Tropicana where there is an array of beer choices and German-based food.

New this summer at Bally’s is The Yard – Beer, Eats and Beats, a garden-style venue under a 10,000-square-foot glass structure that offers a number of craft beers and an American gastropub style menu. The Yard will have music right after the show.

Looking to escape the city madness? Then head bayside to Back Bay Ale House in Gardner’s Basin where the friendly bartenders will serve you a variety of Bason Mason’s. The outside bar offers plenty of seating to catch the sunset and watch the fishing boats go by.

Thank you for relying on us to provide the local news you can trust. Please consider supporting NJ.com with a voluntary subscription.