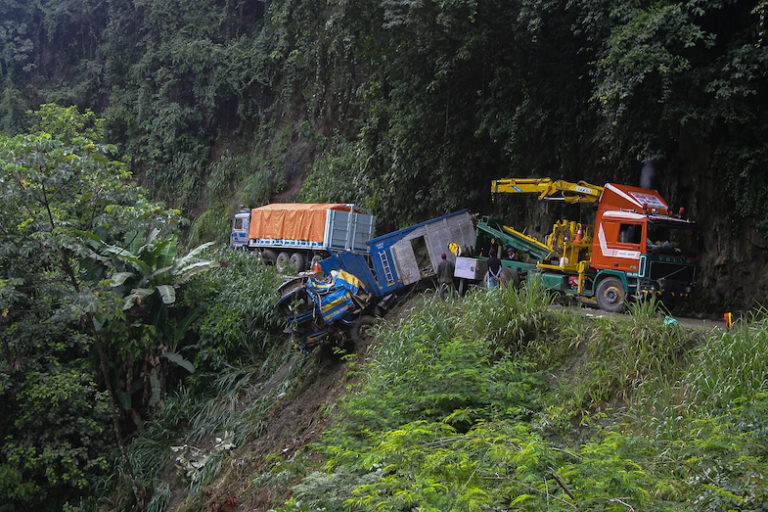 In Bolivia, the infamous “Death Road” has become a haven for life. Once the only route north from La Paz, the narrow and treacherous old road to the Yungas claimed an average of 300 lives per year during peak usage.

However, since the construction of a safer road in 2007, traffic has dropped 90% and wildlife has crept in, according to a new study by the Wildlife Conservation Society (WCS) published in the journal Ecología en Bolivia.

Scientists placed 35 camera traps along and nearby a 12-kilometer (7.4 mile) stretch of road as well as in the surrounding Cotapata National Park and Natural Integrated Management Area in 2016. The camera traps recorded 16 species of medium and large mammals including the dwarf brocket deer (Mazama chunyi), mountain paca (Cuniculus taczanowskii), oncilla cat (Leopardus tigrinus) and the spectacled or Andean bear (Tremarctos ornatus).

“The record of the Andean bear and the dwarf brocket deer was what surprised us the most, because these are two very elusive and difficult to observe species that normally avoid places with human presence,” Guido Ayala, WCS Scientific Research Coordinator and the lead author of the study told Mongabay.

“The data recorded in this study confirms this trend, showing that wildlife has returned to the area, due to the reduction in vehicle traffic and the presence of humans,” Ayala said.

Roads are generally terrible for the forest. As forests dry out along roadways, issues like wildfires and forest degradation along edges can weaken ecosystems, and roads open a pathway for other destructive activities such as logging.

For wildlife, roads increase roadkill, noise, and chemical pollution, and hinder animals’ ability to move safely across the landscape. Frogs, bats, and birds are particularly affected by the noise from roads, which can disrupt the vocalizations they use for courtship, communication and defense.

When the “road of death” was in heavy use, Ayala said, roadkill, noise pollution, and the capture of wild animals as pets were the main threats to wildlife. Park rangers reported to WCS that they had seen little evidence of mammals around the road between 1990 and 2005.

“The fauna, when this road was still functioning, it was being affected by the pollution that vehicles generated, the noise and dust,” Maria Viscarra, a biologist who participated in the study told Reuters.

Now, all of these threats have decreased significantly and the situation for wildlife is much better. For instance, “there are no reports of animals being run over or species being captured for pets,” Ayala said. “The results also demonstrate the resilience of nature in the wild, and the importance of connectivity for protected areas.”

At present, “the greatest threats to wildlife in the region comes from the slash-and-burn linked to coca cultivation,” Ayala adds.  Coca leaves, which are used medicinally or processed into cocaine, are a key cash crop in Bolivia. In order to grow the crop, the land must be completely cleared of forest. This is achieved by cutting down all of the vegetation and then, once it dries, setting the brush ablaze. Efforts to stop illegal cultivation, such as the aerial spraying of crops also damage forests and biodiversity.

Coca crops were present in six of Bolivia’s protected areas in 2019, according to a UNODC report. Combined, these illegal plantations spanned 319 hectares (788 acres). More than 37 hectares (91 acres) of illegal coca plantations were reported inside Cotapata National Park, the Park nearest to the old road, with more farms reported outside of the park.

But overall, rangers and researchers are celebrating a win for local wildlife around the old road. “It is so nice,” Ayala told Reuters, “that we have a place close to the (capital) La Paz, some 50 minutes away, where one can come and see nature in a beautiful way.”

Banner image of a truck being retrieved from the road of death. Image by Rob Wallace /WCS.

Liz Kimbrough is a staff writer for Mongabay. Find her on Twitter @lizkimbrough

FEEDBACK: Use this form to send a message to the author of this post. If you want to post a public comment, you can do that at the bottom of the page.