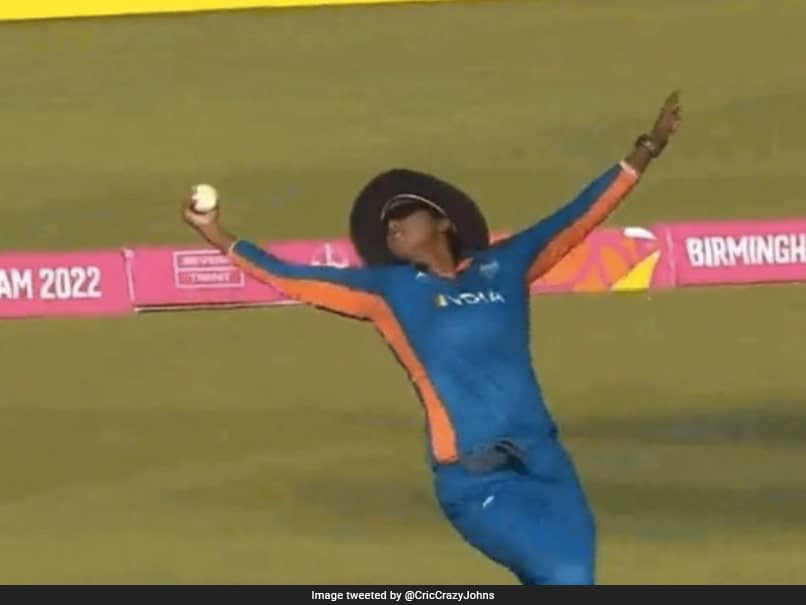 The gold medal match in the women’s cricket event of the Commonwealth Games 2022, ended with Australia being crowned as the champions and India settling with a silver medal. Chasing 162, the Harmanpreet Kaur-led side faced a nine-run defeat in the thrilling summit clash against the mighty Australia. Despite losing, Team India gave their fans a very special moment to cherish and that was a spectacular one-handed catch by Deepti Sharma to dismiss Australia batter Beth Mooney.

Mooney was in a fiery form in the final clash on Sunday at Edgbaston as she brought up her half-century in 36 balls and gave Australia an upper hand. It was finally in the 18th over, when Deepti Sharma made an extraordinary effort and took a one-handed catch to dismiss Mooney on Sneh Rana’s delivery. The batter departed after scoring 61 off 41 balls.

The fabulous catch by the all-rounder took everyone’s attention and left the fans amazed. The catch is now being widely shared on social media, and it has gone viral.

What a catch from Deepti Sharma One handed catch
One word for this catch#INDvsAUS #IndianCricketTeam pic.twitter.com/hdZ5Lav9bV

In the chase of 162, India were in the driver’s seat with Harmanpreet Kaur and Jemimah Rodrigues going strong. However, the side collapsed from 118/2 to 152 all out, and in the end, Australia wrapped up a win.

For India, skipper Harmanpreet top-scored with a knock of 65.

Earlier on Sunday, New Zealand had won the bronze medal in women’s cricket after defeating England.