Ad P
Hrithik Roshan’s commercial for online food delivery firm Zomato sparked a religious controversy. The Confederation of All India Traders (CAIT) has accused the ‘War’ actor and the food delivery app for “misleading and cheating the people” through the advertisement.

A letter to Madhya Pradesh CM Shivraj Singh Chouhan was sent by the confederation demanding action against the actor and the app as well.

The advertisement is also alleged to have hurt religious sentiments. In the commercial, Hrithik can be seen saying that he felt like having a ‘thali’ in Ujjain and so he ordered it from Mahakal. CAIT said in a statement, “The Prasad Thali of Mahakal is served free for centuries but within a specified place at the temple premises only. There is no question of giving Prasad Thali to anyone outside the temple.”

Now, the food delivery firm has apologised and also clarified what they meant by Mahakal in the advertisement. The firm also informed that the ad has been taken down.
The statement read, “The Hrithik Roshan-starrer ad that ran in specific pin codes of Ujjain referenced ‘thalis’ at ‘Mahakal Restaurant’, and not the revered Shree Mahakaleshwar Temple. Mahakal Restaurant is one of our high-order-volume restaurant partners in Ujjain, and thali is a recommended item on its menu.

The video is part of a pan-India campaign for which we identified top local restaurants and their top dishes based on popularity in each city. Mahakal Restaurant (simplified as ‘Mahakal’) was one of the restaurants chosen for the campaign in Ujjain.

We deeply respect the sentiments of the people of Ujjain, and the ad in question is no longer running. We offer our sincerest apologies, for the intent here was never to hurt anyone’s beliefs and sentiments.

For any further query please reach out to [email protected] 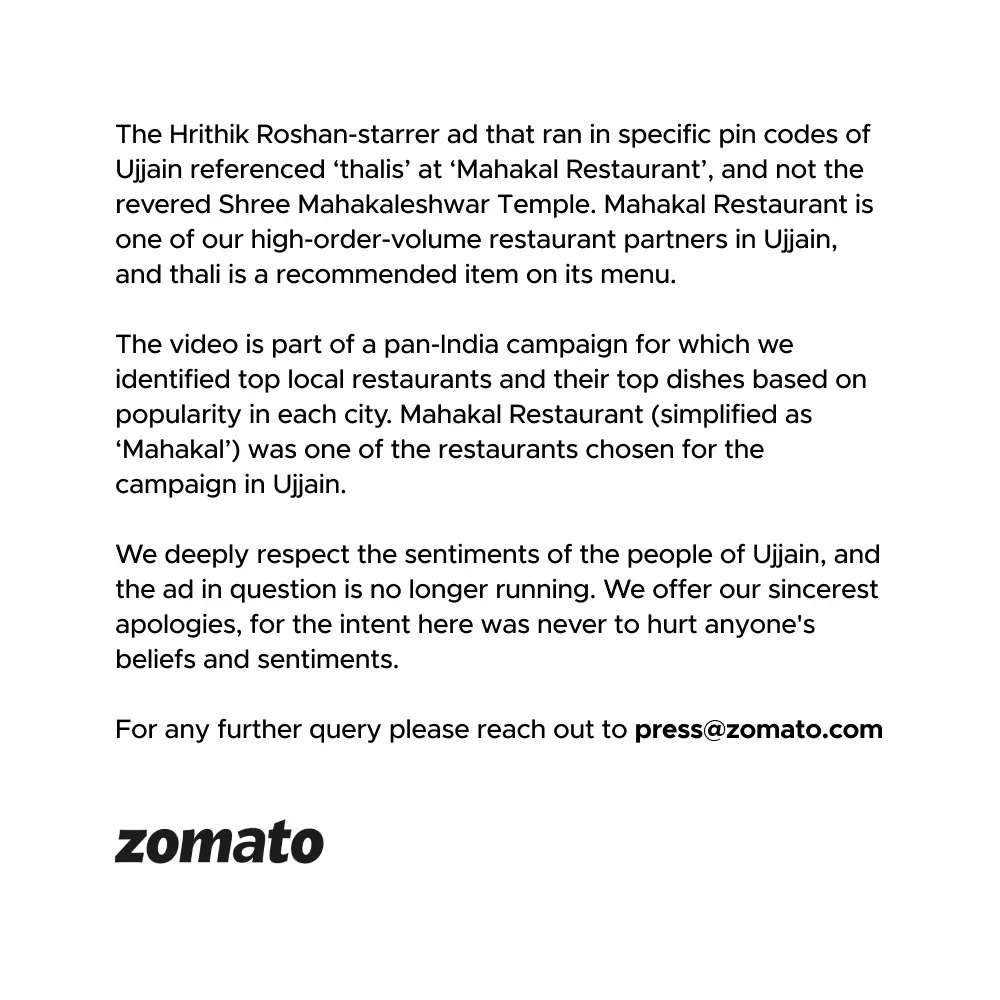 Meanwhile, on the work front, Hrithik will next feature in ‘Vikram Vedha’ remake co-starring Saif Ali Khan. He will also star in ‘Fighter’ with Deepika Padukone.