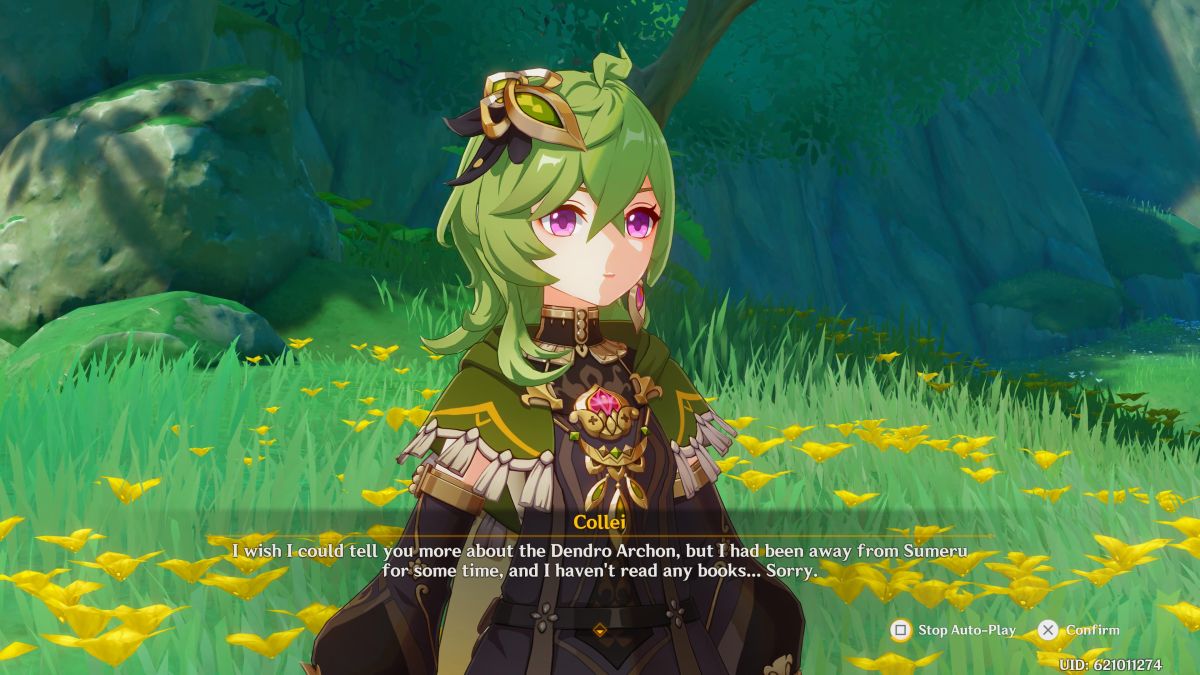 Ad P
Genshin Impact 3.0 brings a handful of new characters to the game, including the 4-star Dendro archer Collei. While players are able to pull her from Tighnari’s banner, there’s an even easier way to get her character without needing to spend anything. You can get Collei for free through the limited-time Graven Innocence event.

Though you can immediately access the event through the quick start option in the event overview page, it’s best to complete a few prerequisite quests beforehand to get the full experience. You’ll need to be at least Adventure Rank 20 to access the Graven Innocence event.

As noted in Genshin Impact‘s events menu, if you choose to quick start the event before completing the prerequisite quests, some characters may be busy with other quests, thus affecting your experience.

How to get Collei for free in Genshin Impact 3.0

1. Complete the Further Observation, Chronic Illness, and The Trail of the God of Widsom quests in Sumeru, part of the first Archon quest you’ll receive upon entering the new nation.

2. Go to the events overview tab in the menu and select Graven Innocence.

3. Start The Unappreciated Carving quest and head to Port Ormos. (Port Ormos is located near the southern end of Sumeru).

4. After talking to some local craftsmen, go back to Gandharva Ville to find a renowned children’s author.

5. After a brief cutscene shortly outside of Gandharva Ville at the quest marker, you’ll receive Collei.

If you don’t want to complete these quests first, you can quickstart Graven Innocence, go to Port Ormos, and collect Collei back at Gandharva Ville.

Further Observation involves helping Collei with some menial tasks in Avidya Forest. You’ll need to check some pathway lamps and clean the nearby Statue of the Seven. This quest occurs after starting the Sumeru Archon quest, entering the nation, and passing out after following a strange person into a cave. Once you awaken, you’ll find that Tighnari and Collei helped the traveler to their residence, which kicks off Further Observation.

Chronic Illness occurs immediately after Further Observation, and the traveler will need to collect some lotuses for Tighnari to make medicine for Collei, who suffers from a rare disease only found in Sumeru.

After collecting these, Tighnari will need help clearing a Withering Zone, an area where the plants and animals have started to die off from a mysterious phenomenon known as The Withering. To clear these areas, you’ll need to summon Dendrograna from nearby plants and hit the red withering branches with charged attacks. Just be careful to avoid the ranged attacks the branches let out afterward.

You’ll then speak with Tighnari back in Gandharva Ville, who tells you to bring Haypasia, the woman you followed before passing out earlier, some food after her meditation. Once you find her, you’ll need to complete a domain with an Abyss Herald at the end.

All that’s left now is to meet back up at Gandharva Ville and say goodbye to Collei before heading to Sumeru City.

The Trail of the God of Wisdom begins in Sumeru City, where you search for information on how to contact Lesser Lord Kusanali, the current Dendro Archon. After talking with several people and finishing the quest, you’ll be able to start The Unappreciated Carving as part of Graven Innocence and get Collei.

With Genshin Impact 3.0 just kicking off, there may be other opportunities down the road to get free characters without spending Primogems on a banner. As of right now, players have until Update 3.1 on Sept. 27 to earn Collei for free. She likely won’t make the S-rank on our Genshin Impact character tier list, but that doesn’t mean she’s not worthy of your roster.

As HoYoverse continues to update one of the best RPGs on Android, there’s still plenty of fun to be had in the new region of Sumeru — even if it still doesn’t support any good Android controller. If you haven’t yet jumped into the game, it’s completely free-to-play, though you might end up spending some money on microtransactions to pull for the best characters.