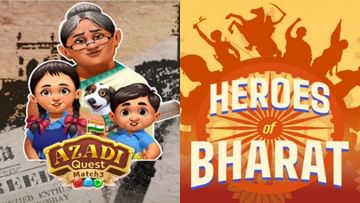 Ad P
Zynga Inc. is the parent company of the popular game GTA 5. Government of India in collaboration with Ministry of Information and Broadcasting has launched two new mobile games in the country. Azadi Quest: Match 3 and Azadi Quest: Heroes of India two games have been brought on the occasion of India’s 75 years of Independence Day. Gamers can download both these games for free and can be played in both Hindi and English languages.

As part of the gameplay mechanics, Zynga tells the story of India’s independence through these two games. Players who complete the games will also receive a certificate to mark their achievement.

What is Azadi Quest: Match 3 Game?

In Azadi Quest: Match 3 Puzzle, players are guided by a delightful cast of characters. Rekha, a motivated history student; Chhotu, Rekha’s restless younger brother and Sheru their pet dog. Grandma can be seen as the narrator to fully describe this game. Eager grandchildren always flocked around Grandma to listen to her stories. Grandmother guides the players with her story to follow the wonderful path of India’s freedom here.

Match 3 showcases historical twists and iconic events in the life of a notable freedom fighter as gamers go through the Azadi Quest. Players can also collect trivia cards, compete on leaderboards and of course share their achievements on social media.

Azadi Quest: Heroes of India, which is actually a quiz game

Hero of India is a quiz game for mobile devices with 750 questions on India’s freedom struggle. It aims to test and enlighten players on their knowledge of some of the unsung ‘Azad Bir’ heroes. Match 3 is much like a puzzle, players can collect trivia cards in this game as well.

Regarding these two games and the partnership with Zynga, Union Information and Broadcasting Minister Shri Anurag Singh Thakur says, “Gaming is the best medium to teach the youth about our country’s history and value the Independence Day.” Both games are now available for free download on the Apple App Store and Google Play Store.