The benchmark indices have repeated the pattern of bouncing back sharply after three consecutive months of slide. In July, the Nifty-50 rallied 8.7 per cent after posting three straight months of losses.

Last time a three-month continuous fall happened was from January to March 2020, when the uncertainty around the Covid-19 pandemic and lockdowns rattled investors. But the Sensex gained 14.4 per cent in April 2020. In fact, similar scripts have played out in 2008, 2011 and 2012.


During the 2008 Global Financial Crisis, markets had plunged between September and November 2008 only to bounce back 7.4 per cent in December. In fact, the Nifty has, not even once, seen four straight months of declines in the past two decades. However, between October 2015 and February 2016 the Sensex had declined for four consecutive months and fell marginally in December 2015, while the Nifty eked out a small gain. The latest jump in the market comes after the benchmark indices fell to their lowest level in 13 months during mid-June.


Both the Sensex and the Nifty had almost slipped into bear market territory, largely on account of sustained selling by foreign portfolio investors (FPIs). Hawkishness by central banks and stretched valuations led to pullout by FPIs and battered stocks during the first half of 2022.


The geopolitical tensions in Europe and rising Covid-19 cases in China led to disruptions in commodity prices and threatened heightened inflation. The depreciation in rupee also led to some selling by FPIs as when the value of a country’s currency falls, it eats into the returns of overseas investors. 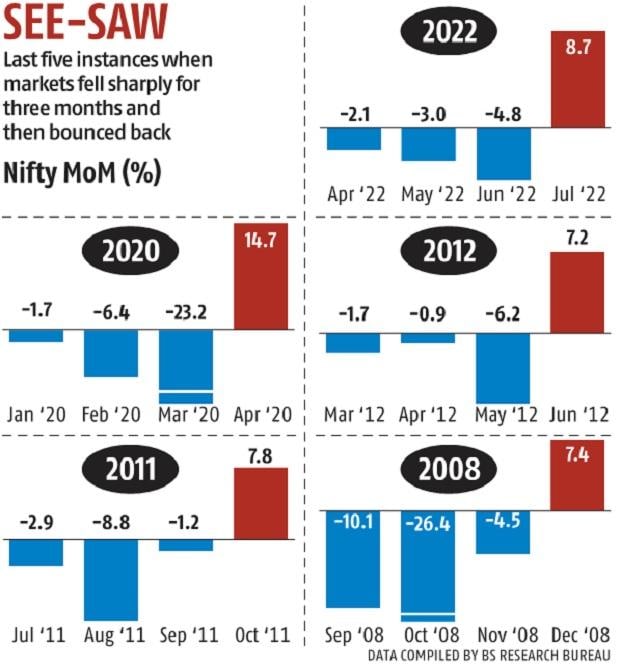 However, the FPI selling has stemmed in July amid cooling commodity prices and hopes that the economy has seen ‘peak inflation’.


“Markets believe that we have seen the peak of inflation. And as far as the Fed hikes are concerned, we are in the middle of the 3.75- 4 per cent benchmark interest rates the Fed is planning. Investors believe that the worst is going to get over. And despite the cut in GDP (gross domestic product) forecasts, India’s economic growth is on solid footing,” said G.Chokkalingam, founder, Equinomics.


Market players say three months of declines, followed by a month of bounce back, happens in a bear market phenomenon. The rise can be attributed to valuations turning favourable.


“After two or three months of fall, the valuations become attractive for many market segments. This time around, oil prices have come down and so have other commodities; that has given some comfort on the inflation front,” said Chokkalingam.


However, following a sharp bounce in July, the valuation comfort may no longer be there.


“The Indian equity market recovered sharply last month and outperformed most other equity markets. As a result, India’s price-to-earnings (PE) valuation premium increased again compared to its peers (MSCI India’s valuation premium reached 82 per cent versus MSCI of emerging markets). We expect India’s relative valuation to remain elevated, supported by its improved macro fundamentals and relative attractiveness. However, geopolitical risks and recession fears amid aggressive tightening by major central banks are key headwinds that could lead to heightened volatility in the near term. Against this backdrop, some caution and risk management are warranted as India’s valuation premium is still elevated,” said Jitendra Gohil, Head-India equity research, Credit Suisse Wealth Management. He prefers defensive sectors such as financials, healthcare, autos, and FMCG, given the uncertain environment.


Experts believe the markets could consolidate at current levels. “The Ukraine war is still raging, and commodity prices will continue to get impacted. And the balance sheet reduction plans by the Fed could weaken emergency market currencies. And the FPI buying could come under stress,” said Chokkalingam.