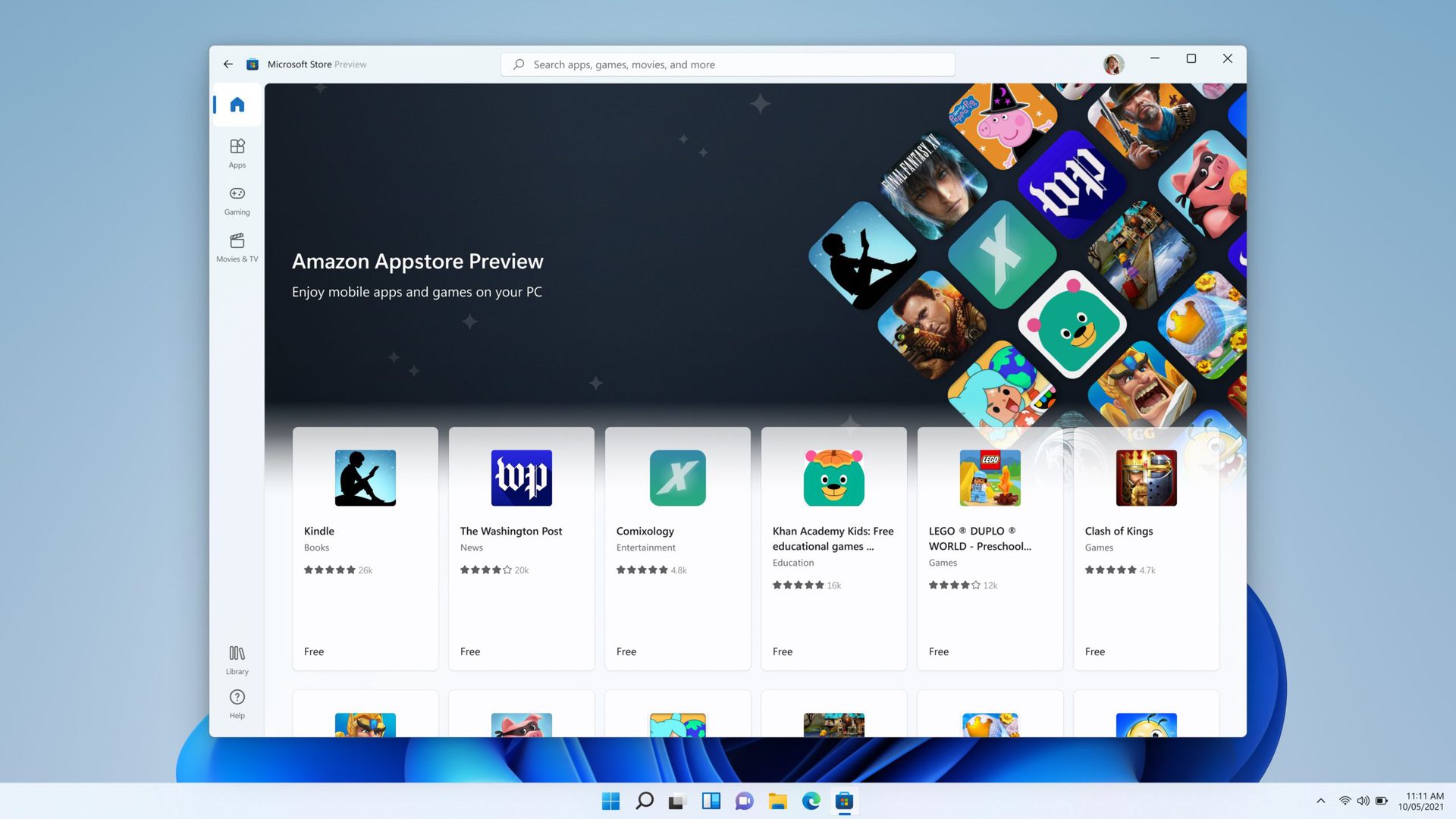 Read also: How to install Google Play Store on Windows 11

To install Android apps on Windows 11, you will need to update to the latest build and install the Amazon Appstore from the Microsoft Store. If you’re outside the US, you can also sideload the Windows Subsystem for Android and install apps using the APK files.

How to get Android apps on Windows 11 officially (US-only)

Android apps on Windows 11 are officially available only in the US for now. The requirements are that you should have a compatible Windows 11 system, running Build 22000.526 or higher.

Install the Windows Subsystem for Android

Now that you have the latest Windows 11 build, you can move on to install the Windows Subsystem for Android. This is basically an entire Android build that runs as a virtualization instance inside Windows, letting you run Android apps on Windows. There are a few steps to getting the subsystem on your Windows 11.

Open the Microsoft Store, and click the Library tab at the bottom left corner.

Your Microsoft Store should finish updating. Click the profile button on the title bar to the right to check the version. The version number should be in the About this app section. Make sure it is 22110.1402.6.0 or higher.

Once your Microsoft Store is up to date, you can move on to enable virtualization. Older systems will need you to flip the switch in the BIOS/UEFI settings, usually called Intel VT-X or AMD-V, depending upon the brand of CPU in your system. Then you can enable it inside Windows 11.

Open the Control Panel, navigate to the Programs section, and click Turn Windows features on or off. Enable Virtual Machine Platform and Windows Hypervisor Platform by ensuring the boxes next to them are checked, and click OK.

The process to install Android apps officially is rather simple. You will need a US Amazon account.

Open the Amazon Appstore via the Start menu/search. Click the Already an Amazon customer? Sign in button, enter your credentials and click Sign-In. Search and select the app you want to install, and click the Get/Download/Install button.

How to get Android apps on Windows 11 unofficially

The requirements are the same here. You will need Windows 11, build 22000.282, or later. You also need to enable hardware virtualization and meet minimum system requirements. The difference is that we will have to sideload the subsystem instead of installing it officially. Ensure you update Windows before you begin, and enable Virtual Machine Platform and Windows Hypervisor Platform.

Read more: The complete guide on how to install Windows 11

Sideloading the Windows Subsystem for Android

Some folks may not be able to get their hands on the Windows Subsystem for Android and Amazon Appstore despite following the steps. In that case, installing the Subsystem manually is an option. It’s a little tricky, but it can work.

In PowerShell, copy-paste this code:

You’ll have to agree to the agreement terms of the store in PowerShell. When prompted, type in the letter Y and press the Enter key.

PowerShell will then prompt you with some more license terms, specific to the Subsystem this time. Press Y and Enter again.

The Subsystem package will then download and install, and you’ll get a Microsoft Store notification saying it was successful.

If you managed to get the Amazon Appstore to install directly, you can open it by searching for it from the Start menu. It will ask you to log in once with your Amazon US account. Once done, you can search for the app you want and click the Get button to download it. Any Android app installed on Windows 11 will show up as a normal program you can directly run from the Start menu.

Also read: The best Android emulators for PC and Mac

If you don’t have access to the store, which you won’t if you sideloaded the Subsystem, you will have to download the APKs and install them via PowerShell manually. For this, you will need to have a system-wide Android Debug Bridge (ADB) installed on your system. This is needed because the Subsystem acts like an Android phone wirelessly connected to the Windows 11 PC, and you can use ADB to leverage that connection to push APKs of your choice. This method is useful for installing apps that are not available on the Amazon Appstore.

Download the 15-second ADB Installer here. Extract and run the installer. Give the administrator permission when asked. It will run in a terminal window, asking you Y/N as yes or no for installing specific components. We need all three components, so press Y and the Enter key for all three — install ADB and Fastboot, install ADB system-wide, and install Drivers. The driver installer will pop up as a separate window, which you have to follow to finish the installation.

Download the APK file of the app of your choice from a trusted source like APK Mirror. For this tutorial, we’re using the Firefox browser for Android. Run the Windows Subsystem for Android. You can do this by simply searching for it and clicking on it from the Start Menu.

In the settings, make sure Developer Mode is turned on. Click the boxed arrow in the Files tab to get the Subsystem running.

Run PowerShell as an administrator again.

Use the command adb devices to verify that the connection was successful.

Now, find the APK file in your Downloads folder. Right-click it, and click Copy as path.

Go back to the PowerShell window, type adb install, and paste the path you copied. Make sure to remove the quotation marks at the beginning and end of the path. You can use arrow keys to navigate through the command text. Your final command should look like this:

The app is now installed, and will show up in your installed apps in the Start menu.

What Android apps can you get on Windows 11?

For now, the Amazon Appstore for Windows has over 1,000 apps available. These include games like Lords Mobile, June’s Journey, Coin Master, reading apps like Kindle, and kids’ apps like Khan Academy Kids and Lego Duplo World. Big apps like Gmail and YouTube are missing, due to the absence of Google Services.

With the sideloading method, it’s more or less the same issue. You will not be able to install apps that require Google Services or have split installation files with an APKM extension. However, you can install more than 50 apps this way, provided you can find the APK file.

You can also sideload the Google Play Store on Windows 11 if you want access to the full catalog of Android apps. We have a dedicated guide to it, linked below.

There’s one big upside to native Android emulation on Windows — there’s no need to install third-party Android emulators. There are many uses for this, including using chat apps like WhatsApp on your PC or trying to play mobile games on your PC. The process of installing Android apps on Windows has always been a long one, but when the final release of this feature hits, it will become quick and easy, likely for good.

It is also likely to take up fewer system resources than third-party emulators. So far, in the current stage, this feature has a few quirks, but we expect it to be smooth sailing by the time it’s ready for public release.

Yes, Windows 11 can officially run Android apps. The feature is only available in a few countries right now, but you can unofficially get it running if you want to.
Yes, you can. There are ways to unofficially install Android apps using APK files, and also install Google Play Store.