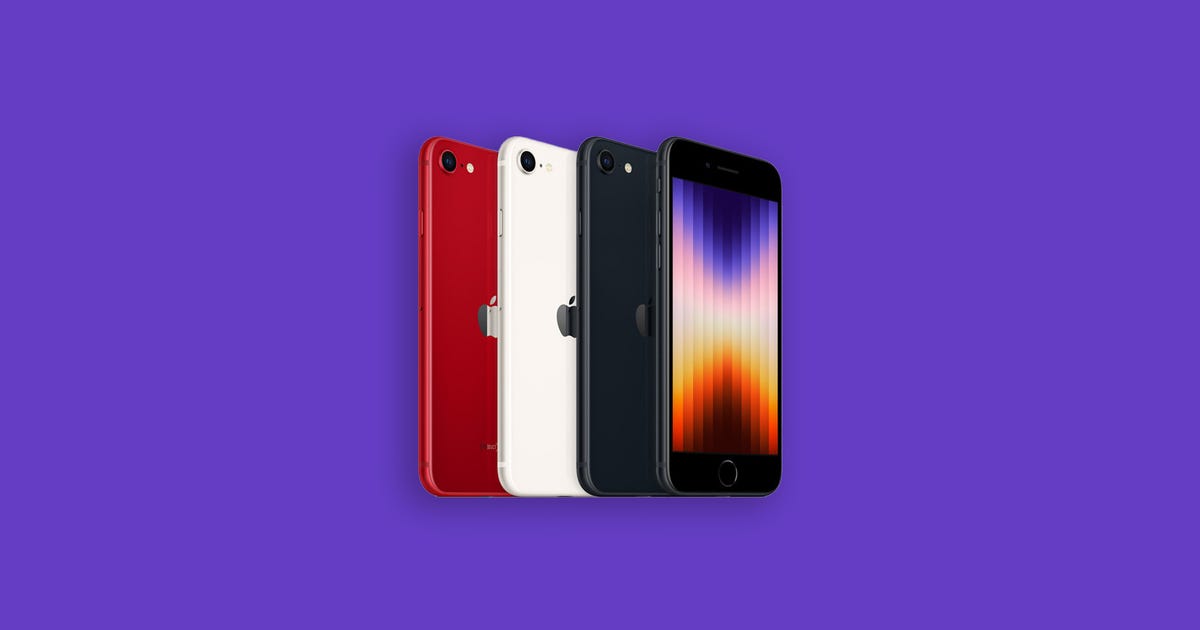 If you’re trying to decide between the two, consider which factors matter to you the most. The new iPhone SE supports 5G networks, which may not be critical right now but could be in the years to come. It also runs on Apple’s newest mobile processor. But the iPhone 11 has a significantly larger screen and a secondary ultrawide camera lens for taking broader photos.

Apple is also expected to release the iPhone 14 in September, which means other current phones might get a price drop in the near future.

Our full review of the iPhone SE has more detail about its benefits and shortcomings, but here’s how it compares to the iPhone 11.

Do you really need 5G?

When the iPhone SE launched in March, the iPhone 11 became the only phone Apple sells that doesn’t support 5G. Is that a big deal? The answer is a bit complicated.

The short answer? No, you don’t need 5G today, especially if you’re satisfied with the speeds you’re getting from your current 4G device. But you’ll probably want 5G in the next two to three years.

Even then, you probably don’t need to worry about your 4G phone becoming obsolete anytime soon. Carriers are only just phasing out 3G networks in 2022 after the network launched 20 years ago in 2002. If 4G LTE networks follow the same trajectory, carriers likely won’t begin phasing them out until roughly 2030 since these networks only began rolling out around 2010.

For the most part, today’s broadly available 5G networks are only slightly faster than 4G LTE, and coverage can vary depending on your location and carrier. As such, the shift to 5G probably hasn’t been very noticeable for many people just yet, and probably won’t be in the short term.

Review: The iPhone SE Is an Incredible Value


The fastest version of 5G, known as millimeter wave, isn’t available on the iPhone SE. But even if it was, you probably wouldn’t end up using it very often, if at all. This type of 5G only operates at short distances since it has trouble penetrating buildings and other structures. That means you can only find it in select areas like certain stadiums and intersections in specific cities.

Verizon has been the most aggressive carrier in deploying this 5G flavor, but you’re likely only going to encounter it on certain street corners in major cities or in parts of certain airports, stadiums or arenas.

The more important version of 5G, known as midband, is present in the iPhone SE. This is the sweet spot among 5G flavors and offers the best mix of coverage and speed. Because nothing is ever simple, there are also a few versions of this flavor of 5G. But the iPhone SE supports most of the versions deployed by carriers today.

It’s not available everywhere yet, and coverage varies by carrier. But network providers are making progress. Verizon and AT&T just turned on their C-band networks on Jan. 19,  but are moving quickly. Verizon says it already covers over 100 million people with C-band 5G (what it calls “Ultra Wideband,” or “UW”) and is targeting 175 million people by the end of 2022.

T-Mobile has built out an early lead in 5G thanks to its Sprint purchase a couple of years ago. It already covers 210 million people with its midband 5G (what it calls “Ultra Capacity,” or “UC”) and is aiming to cover 260 million people by the end of this year and 300 million in 2023.

AT&T has backed off its targets for midband 5G coverage (what it calls “5G Plus”) in 2022, but is aiming to cover 200 million people with its midband spectrum by the end of next year. The iPhone SE supports some flavors of AT&T’s midband 5G (the version known as C-band) but does not work with all of it, namely the 3.45GHz spectrum that the carrier will begin deploying later this year nationwide. To get the full AT&T 5G experience, you may need to buy a 2022 flagship phone such as Samsung’s Galaxy S22 or wait for other devices like the rumored iPhone 14 to appear.

The iPhone SE’s pros and cons

The iPhone SE would be the right choice for those who want the least expensive iPhone and prefer smaller devices. Other than its low price, the iPhone SE’s biggest attributes are its support for 5G and the inclusion of Apple’s A15 Bionic chip. That’s the same chip found inside the iPhone 13, meaning the iPhone SE has some of Apple’s more modern internal camera upgrades.

For example, the iPhone SE has the latest version of Apple’s high dynamic range processing for photos, known as Smart HDR 4. The company says this technology applies different optimizations around noise, color and contrast for the subject compared to the background of an image, which should make the subject stand out.

The iPhone SE also has a feature called Photographic Styles that debuted on the iPhone 13. It lets users apply preset color and contrast profiles to the camera app that kicks in each time you take a photo and can be customized. Apple’s pixel-by-pixel photo processing technology, which should result in crisper detail and texture, also works on the selfie camera in addition to the main camera. Apple calls this feature Deep Fusion.

These upgrades should certainly make the new iPhone SE better at taking photos than its predecessor. But whether it’s better than the iPhone 11 is a tougher question. The iPhone 11’s A13 Bionic chip doesn’t support some of the newer software processing features seen in the new iPhone SE. These include Photographic Styles and the most recent version of Apple’s high dynamic range capabilities.

But the iPhone 11 does have other extras that photographers might appreciate compared to the iPhone SE. The biggest of them is a dual-lens camera that includes a standard lens and an ultrawide lens, meaning you can capture scenes with a much broader field of view than the iPhone SE.

Other than general performance and some additional camera improvements, having the newest Apple processor also means the iPhone SE will support new iOS features for generations to come. To be clear, Apple’s iOS 16 operating system can run on iPhones as old as the iPhone 8 and iPhone X from 2017. So it doesn’t look like the iPhone 11 from 2019 will lose software updates anytime soon.

But having the A15 Bionic inside of the iPhone SE instead of the iPhone 11’s slightly older chip could enable more new features for years to come. Certain features in iOS, like spatial audio in FaceTime and Siri’s on-device processing, only work on Apple’s 2018 iPhones and later even though older phones can still run the software.

That said, there are also some hardware-based restrictions that limit the iPhone SE’s capabilities, even with its newer chip. Unlike the iPhone 11, the iPhone SE lacks ultra wideband functionality, which is the tech that makes it possible for your iPhone to provide turn-by-turn directions when locating lost AirTags. This isn’t a deal breaker and likely won’t impact daily use. But it’s worth thinking about if you own or are thinking about purchasing AirTags.

The iPhone SE is also the only model Apple sells that still has a physical home button with Touch ID. That might be ideal if you’re upgrading from an older phone like the iPhone 8 and don’t want to learn Apple’s swipe gestures. It’s also good if you simply aren’t into Face ID, especially since you don’t need to make any adjustments to Touch ID when you are wearing a face mask.

All told, the iPhone SE is the right choice if you prefer smaller phones and want the cheapest iPhone possible. If you’d rather have a phone that will feel fast and support more general iOS features for years to come, but don’t care about having a bigger screen or more versatile camera, it’s the right phone for you.

The iPhone 11’s pros and cons

Despite lacking 5G and Apple’s newest processor, the iPhone 11 feels more like a modern phone than the iPhone SE in several ways. It has a larger, 6.1-inch screen, which is the same size as the iPhone 13’s display. It also supports Face ID like Apple’s other flagship iPhones and has a dual-lens camera. The iPhone 11 also has Apple’s newer design with a nearly borderless screen, while the iPhone SE has bezels above and below the display.

The screen is one of the most important aspects of any phone since it’s how we interact with our devices. As such, display size should be a major factor when deciding between the iPhone SE and iPhone 11. Both phones have an LCD screen and the same number of pixels per inch, so they should offer similar quality. But there’s a drastic difference in size. If you do a lot of reading and TV watching on your phone, the iPhone 11 might be the better choice.

The camera is another major consideration. While the iPhone SE gains some benefits from the A15 Bionic processor, the iPhone 11’s dual-lens camera has more flexibility when it comes to shooting modes.

If you take a lot of group shots with friends or family, or love capturing broad scenic views during a hike, you might want the iPhone 11’s secondary lens with a wider field-of-view. The iPhone 11 has Night Mode too, which greatly improves your phone’s ability to take photos in dark scenarios. You won’t get either of those features on the iPhone SE, although Apple does say the new phone should capture better videos in low light.

The iPhone 11 should also provide longer two additional hours of battery life than the iPhone SE when playing back video, based on Apple’s estimates.

On paper, the iPhone SE is better suited for long-term use thanks to its A15 Bionic processor and 5G support. But I’d say both phones are really meant to be upgraded after two to three years — for different reasons.

The iPhone 11’s processor is already two generations old and it doesn’t support 5G, so you might miss out on faster speeds and certain iOS features if you hold out for too long. But depending on your preferences, you might also find the iPhone SE’s tiny screen and single-lens camera to be limiting after a couple of years.

The iPhone 11 is a better all-around choice if you don’t mind possibly upgrading in the next two to three years for 5G. But if you just want a basic iPhone that’s more affordable and designed to last for a while, the iPhone SE is the right pick. Just remember you’ll have to be willing to sacrifice newer features like a dual-lens camera, a larger screen and better low-light photography.

Either phone should offer a noticeable step up for anyone upgrading from an iPhone that’s at least 3 to 4 years old. Before you decide, it’s also worth checking whether you’re eligible for any trade-in discounts through your carrier or other retailers. You might be able to snag an iPhone 13 for hundreds of dollars less than its regular price if you meet the right conditions, which could be a better option for some budget shoppers.

The long-awaited successor to the iPhone SE (2020) was announced by Apple during its March 8 “Peek Performance” event. It features Apple’s A15 chip (which is the same one found in the iPhone 13 series), 5G, stronger glass and maintains the same overall design as the previous gen.

Pricing for the new iPhone SE starts at $429, and preorders begin on March 11.

The iPhone 11 came out in 2019, but it still packs a lot of value at its new $499 price. It has a dual-lens camera with a wide and ultrawide lens, a spacious 6.1-inch screen and night mode for taking better photos in the dark. It’s missing 5G support and runs on an older Apple processor. But if you don’t care about having 5G right now, the iPhone 11 has everything else most people need in a phone.