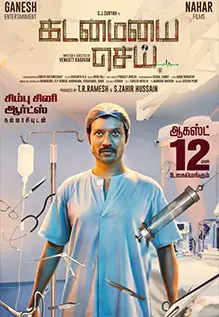 Kadamaiyai Sei Movie Synopsis: A civil engineer who has lost his job meets a tragic accident when he is about to reveal a shocking truth that will save countless lives. Kadamaiyai Sei Movie Review: Only a few films are so unique that they don’t fall under one genre and most of the time they never realise what kind of a film they turn into. SJ Suryah’s Kadamaiyei Sei is one such experience where the film does so many things swaying from its very purpose (Kadamai). While the core idea of the film is decent, amateurish making and a very flawed writing let’s the film down.

The film revolves around life of a civil engineer Ashok (SJ Suryah) who loses his job and takes up odd jobs like the role of driver to meet his family’s daily needs. He lands up as a security guard at a posh apartment in the city. When he stumbles upon a striking issue with the construction of the apartment, he tries to bring it to light. But little does he know that a road accident would cripple him forever.

How does Ashok manage to save everyone, given his abnormal medical condition? There are a lot of medical terminology used in the film where they describe this particular condition as stuper, a brain disease and that the patient suffering from it would react in a hyper way when provoked.

While all these ideas are fine, the problem lies in how this film is presented. From the very first scene, we get to witness awkward camera movements, angles and editing patterns that disturb the flow of the film. This Kadamaiyei Sei could have been handled in a better way if not for the irrelevant humour now and then. The makers should have decided whether they want to make a sensible film or add illogical sequences for commercial aspects.

But unfortunately the team has chosen the latter. Though the humour works in some places, we never get to realise the seriousness of the plot due to weird characters and their actions. You find these characters all over the place whenever the story needs them for convenience. All these makes it look like a huge blunder.

SJ Suryah and Yaashika Aanand look like a TV soap adding no value to the storyline. While SJ Suryah has really bent himself for the role, the question is whether is it all worth it? There are few scenes with interesting elements but it fails to create an impact among the viewers.

The setup and playoffs are very poorly planned and doesn’t rescue the film in anyway. We realise that the entire film is going to collapse just like the building with the only exception that we have no Ashok to save it.