In Pune, going for a film at Victory Theatre in Camp means stepping back in time through one of the tall arches that make up the entrance. Across an airy lobby is a door that leads to a dark single-screen theatre where rows of modern seats and air-conditioning coexist with British-era structures such as a balcony that ‘hangs’ without pillars. Weekends are packed and weekdays draw a sizable crowd, especially of groups who have been coming here for decades.

Ad P
What is less evident in the hall is that Victory Theatre was once the site of a bomb blast inspired by Mahatma Gandhi’s historic ‘Do or Die’ cry. Three British soldiers were killed and 13 injured on January 24, 1943, while watching a film at the theatre. At that time, Victory Theatre was known by its original name, Capitol Cinema, and Pune was Poona.

According to ‘History of Poona Cantonment, 1818-1953’, compiled by Muhammed Hashim Moledina, Capitol Cinema was set up as part of the ‘Travelling Cinemas’ initiative of 1912 by A C Patel, who had started cinema theatres in Bombay. The first cinema in Cantonment was Napier, a makeshift structure, which was so popular that it was converted to a permanent structure and called West End. It played silent films until 1931, when it was converted to a Talkies Theatre. Capitol was the second theatre in the area. “The premises of this theatre were originally the showroom and offices of Ms Ludha Ebrahim & Co, but later on, in the year 1935, it was converted into a Talkie Theatre,” writes Moledina.

As per film historian Anil Zankar, the first movie theatre of Pune was Aryan Cinema which came up in the old city. “Aryan, Minerva, Globe, Apollo, Alpana, Bhanuvilas, Shrikrishna, Prabhat, Vijay, Vijayanand, and Alka were the theatres that served the city for decades. Soon after Aryan, Napier Cinema came about in the Cantonment area mostly serving the British and showing English pictures,” said Zankar.

On August 8, 1942, Mahatma Gandhi addressed the British government from Mumbai’s Gowalia Tank Maidan, now known as the August Kranti Maidan, and asked them to “Quit India”. To the Indians, he said, “We shall either free India or die in the attempt; we shall not live to see the perpetuation of our slavery.” In the crowd that day was an admirer of Gandhi, Baburao Vithoba Chavan, who ran a shorthand and typewriting institute in Ravivar Peth. “I resolved there and then to ‘Do or Die’ for my country,” Chavan told the Centre of South Asian Studies, University of Cambridge, in 1971.

Chavan’s plans were to interrupt British war efforts by blowing up tent factories and furniture workshops that were supplying the army, as well as burn records of government offices and courts. It was when he was unsuccessful in these that Chavan “decided to take some drastic steps to create panic among military personnel”. “We drew up a plan to place bombs in the Poona cinema houses that were screening English pictures that were attended by British officers and other ranks,” he said.

The cinema halls selected for the blast were West End and Capitol. As January 26 was already being marked as the Indian independence day throughout the country, police were extra alert. The day for the blast was carefully chosen two days before. 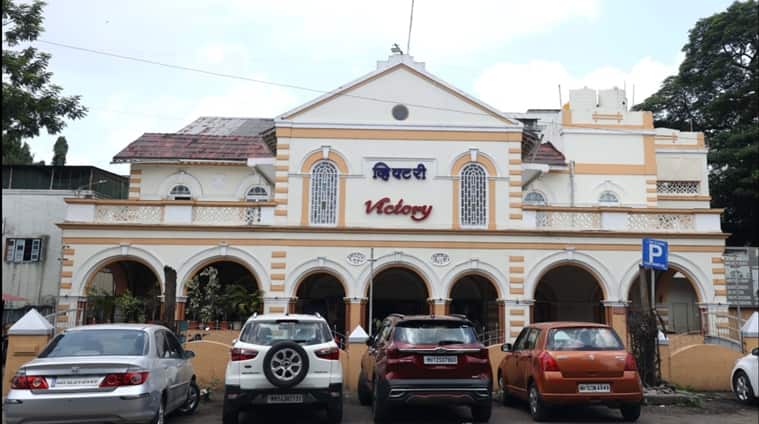 Three British soldiers were killed and 13 injured on January 24, 1943, while watching a film at the theatre. (Photo by Oshwin Kadhao)
Sacrifices and a doomed plan

Today, the ground floor office of the Victory Theatre’s owner, Farokh Chinoy, proudly displays an image of a bearded and turbaned man. This was Bhaskar Karnik, a science graduate who used to work at the Ammunition Factory in Kirkee. “He was not involved in the blast planning from before but was a desh bhakt (patriot). He agreed to help the group when they approached him. At that time, explosives made by Indians were not so successful, because they did not have good resources. Karnik started to store the bomb parts, brought secretly from the factory, in his home,” says historian Mohan Shete. While chatting with the conspirators, Karnik revealed that he always carried poison with him. In case he was arrested by the British police, he would prefer to take his life than give away his friends under torture. Finally, the planning and the explosives were ready.

Two groups of three people each were picked to execute the plan of keeping the bomb under chairs, in rows meant exclusively for military persons. “It is interesting to note that the two comrades, Shri P S Salvi and Shri S T Kulkarni, who were to place the bombs in the cinema houses, were of fair complexion, medium height and athletic build and could easily be mistaken for European military personnel. The other pair, Shri Datta Joshi and Shri Hari Limaye, who were keeping cycles for their respective comrades, were also of fair complexion and trained in disciplined behaviour,” said Chavan, who played the role of a courier with Ramsingh Pardeshi. They were to deliver the packages – cardboard boxes with a grenade in each wrapped in khaki handkerchiefs – to the groups at the two cinema halls.

The bomb at Capitol was the only one that exploded. “Following the explosion, the police got wild and launched a drive to investigate the outrage and indulged in indiscriminate harassment of many innocent people on the slightest suspicion of complicity in the act,” said Chavan. When the police realised that the bomb had come from their own factory, they began to look for the insider and zeroed in on Karnik. A week after the blast, he was in custody. “He was taken to Faraskhana Police Station in Budhwar Peth. The cops were happy because they believed they had cracked the case by arresting him. But, Karnik went to the washroom, where he consumed potassium cyanide and died,” says Shete. Karnik’s memorial, in white marble, is at Hutatma Chowk – Hutatma means martyr – close to the Faraskhana police station.

As for the others, the police failed to make any headway and, in March that year, issued a reward of Rs 5,000 for information that could lead them to the perpetrators. Kulkarni and Chavan were arrested in Bombay while watching a cricket match at Brabourne Stadium that was being played in aid of victims of famine in Bihar. By the end of March, Salvi, Limaye, Pardeshi and Joshi, too, were behind bars. The sessions court found them not guilty, and the high court, too, issued a verdict of not guilty to all but Salvi, in whose case a retrial was ordered. “The trial was never held…Trouper Smith, who was a key prosecution witness, had been killed while on active service on the Burma front,” said Chavan.

What did the blast achieve?

Chavan said that the slogan of ‘Do or Die’ had been misinterpreted by a group of youth who were full of willingness, patriotism and enthusiasm but had no guidance or direction. “Barring a few incidents, our attempts at incendiarism and sabotage, of disruptions of rails and communications, …. failed even to create a scare among the authorities,” said Chavan, adding that the Quit India movement, however did have an impact on the rulers and “could be said to have hastened the process of transfer of power to Indians at last”.

The cinema hall was bought by Dara Bahramji Sukhia at a court auction in 1959. “This property was under litigation for 27 years. Dara Sukhia died in 1960, after which the court cases were fought by his wife, Dina Sukhia. “In March 1987, we finally got possession of this property,” says Chinoy, adding that the name of the cinema hall was changed to Victory as a celebration of their win.

“The cinema was in a sad state but we improved upon it. We undertook a major renovation in 2009 and brought in modern air-conditioning and other facilities and amenities. The earlier capacity of 630 seats was reduced to 439 to make seating more comfortable,” he says. “What’s important is that we have not changed the structure as regulations in the Cantonment area do not allow it,” he adds.

A flight of stairs leads to a vast lobby upstairs where people could wait to enter the balcony. Even now the cinema hall has regulars who refuse to come unless they get a balcony seat. “I request them to sit on the ground floor as it would save them from walking up two storeys. Many have changed to the ground floor,” says Chinoy.

The rates never cross Rs 200, even for big banner films, ensuring that the residents of Camp can have a family outing to the movies for around Rs 1,000, which is far less than one might pay at a multiplex if one were to add snacks to the tickets. “I have to see that I am financially viable and I am. I get a full house a lot, so why not maintain that?” says Chinoy. The door to his office is always open when he is in town, so that he can see who comes and goes. Sometimes, Chinoy stands outside to greet people coming for a show.

“Every generation moves on and standalone theatres have come to a state where they will be phased out as they may not be economical. A very big factor hindering us is the electrical bill. I wish the government would think about giving us a lower rate than the commercial rate but nobody seems to hear us. If they reduce the cost of electricity and a little GST, standalone (theatres) will do better and even those that are not working will start,” says Chinoy.