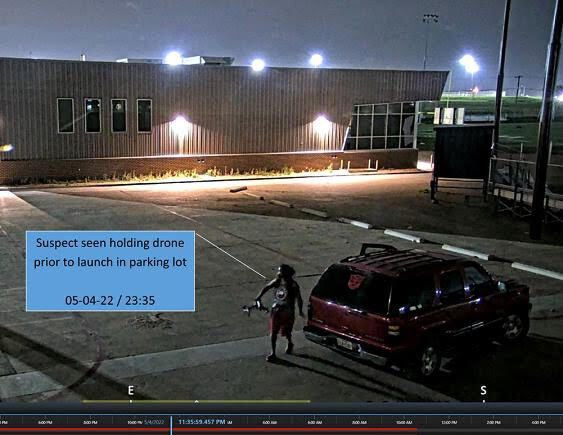 A Smithville man is facing federal charges after authorities say he tried to send drugs and other contraband items into a Fort Worth prison using a drone.

Bryant LeRay Henderson, 42, was arrested Thursday on charges of attempting to provide contraband in prison, possession with intent to distribute a controlled substance and serving as an airman without an airman’s certificate.

His attorney, Joshua Smith Rhodes, did not immediately return a request for comment.

Just before midnight on May 4, staff at the Federal Medical Center in Fort Worth saw a drone with a package hanging from it fly over the prison and crash into a fenced area of the facility, court documents state.

Security footage from about an hour before the drone crash showed a red tahoe pull into the parking lot of O.D. Wyatt High School, located next to the prison. A man is seen getting out of the car, taking the package and drone out and flying it toward the prison before driving away, authorities wrote in court documents.

Fort Worth police conducted a traffic stop on the red tahoe on May 15. During the stop, Henderson gave a false first name to officers, authorities allege.

Investigators were able to determine it was a false first name using driver’s license photos, body camera footage, surveillance footage from the Fort Worth prison and Henderson’s social media profile, according to court documents.

On May 23, the same red tahoe was seen abandoned on a Dallas highway. Dallas police towed the car to the department’s impound lot and found a debit and social security card inside with the name Bryant Henderson, court documents state.

During a search of the car, authorities also found documents and mail with Henderson’s name, a controller for the type of drone that crashed at the Fort Worth prison, various drone accessories and sandals the same as those worn by the person seen in the security footage at the high school, according to court documents.

The car also contained multiple containers listed as containing prescription steroids and syringes, as well as smartphones and tobacco products similar to what the drone was carrying when it crashed, court documents state.

The steroid containers were vacuum sealed and connected to a fishing line and key ring “consistent with being ready to be attached and dropped from a drone,” the court documents state.

Investigators were later able to use the controller found in Henderson’s car to operate the drone that crashed at the prison, according to court documents.

Data from the drone revealed that it had flown in the Fort Worth prison’s airspace five times between April 15 and May 4. The drone also flew over the Seagoville prison nine times between Dec. 11 and May 2, court documents state.

Cell phone records showed Henderson was near the Fort Worth prison at the time of the drone crash, according to court documents.

A search of Federal Aviation Administration records revealed Henderson does not have any certifications. Records also showed the drone was registered to a previous owner, and their registration had expired, court documents state.

Chad E. Meacham, U.S. Attorney for the Northern District of Texas, said in a written statement that the office was “determined to stop” the trend of contraband deliveries to prisons “in its tracks.”

“Contraband drone deliveries are quickly becoming the bane of prison officials’ existence. Illicit goods pose a threat to guards and inmates alike – and when it comes to cell phones, the threat often extends outside prison walls,” Meacham said.

If convicted of all three charges, Henderson faces up to 45 years in prison.