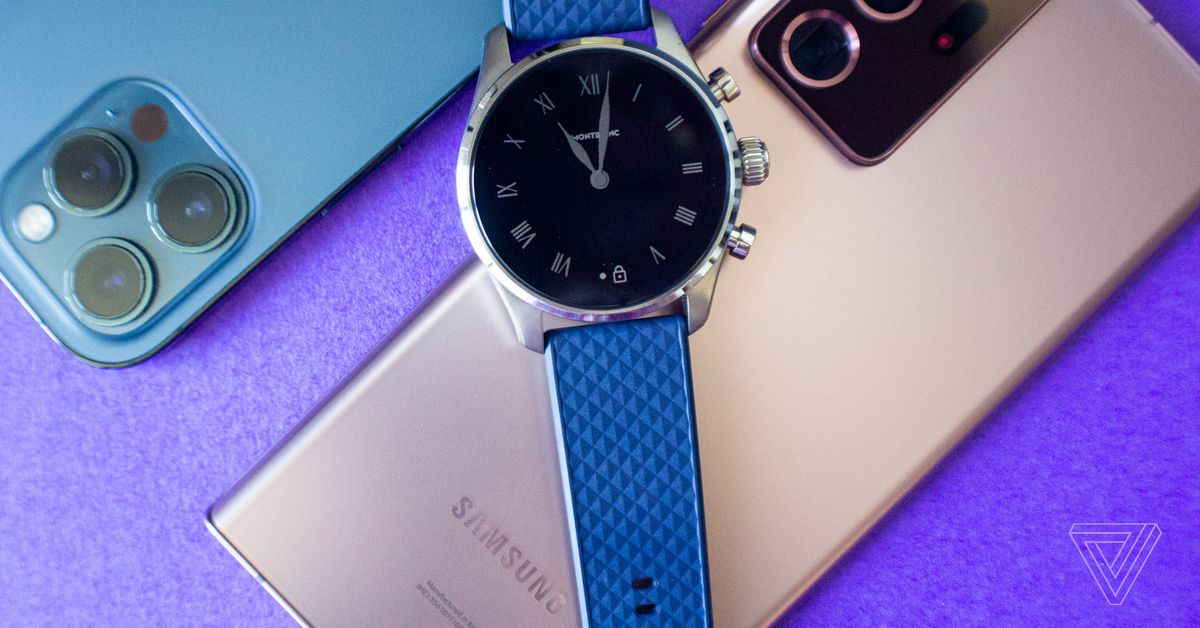 A few weeks ago, I pulled down my sleeve to hide the Montblanc Summit 3 on my wrist. I felt self-conscious wearing a $1,290 luxury smartwatch on a not-so-special day, let alone on the grimy New York City subway. (Never mind the fact that I have no qualms about pulling out a high-end smartphone during a commute.) But this fancypants smartwatch is the first non-Samsung watch to run Wear OS 3, and I wanted to try it.

For $1,300, I expected either James Bond-level advanced features or something ostentatious enough to be worn by some finance bro on a yacht in Majorca. But it’s neither of those things. 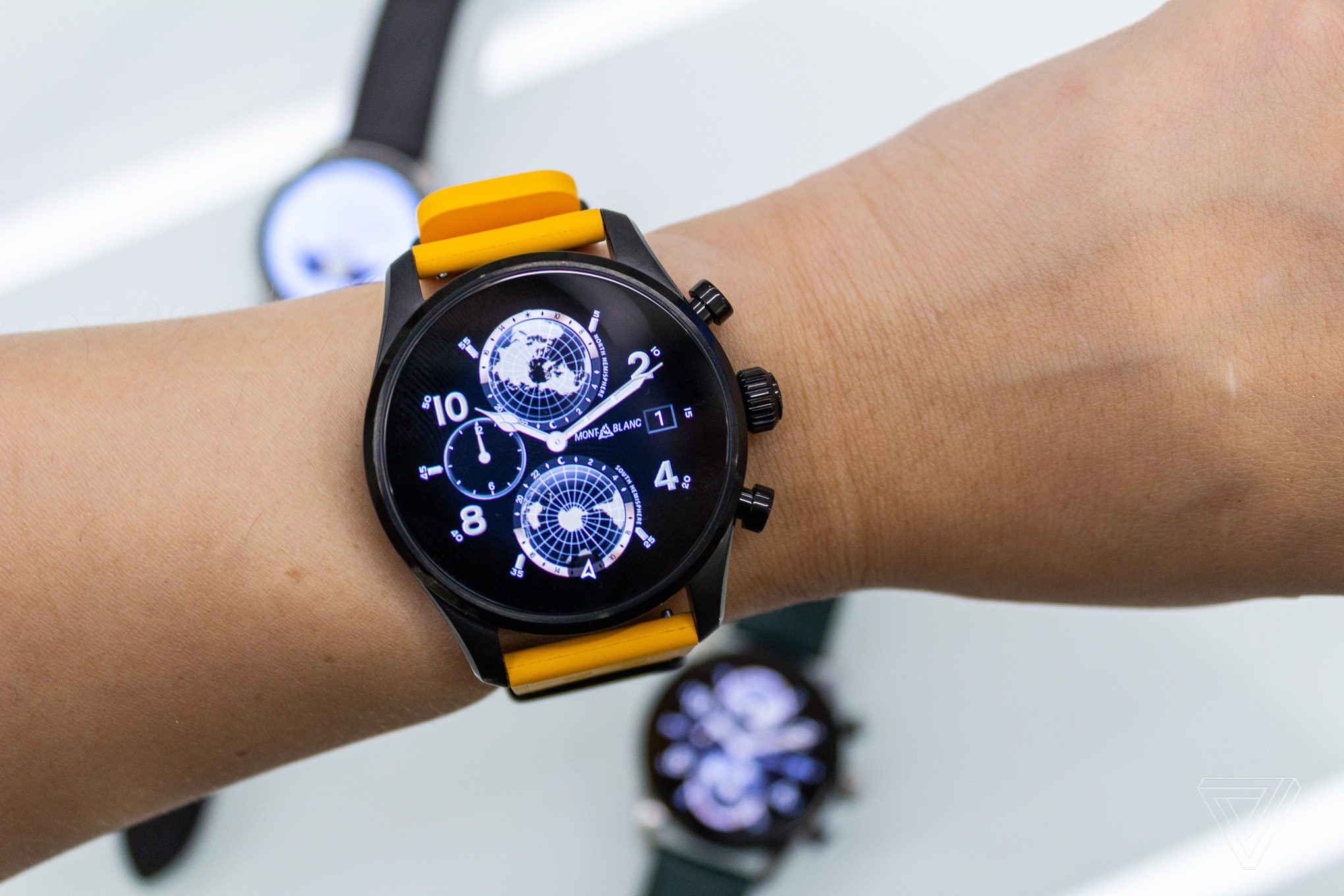 So the Summit 3 is a bit of an odd duck. It’s a $1,300 watch with the guts of a $300 watch but fewer features, running tomorrow’s software on last year’s chipset that works with a platform where nobody with any sense would buy an Android smartwatch. Once again, it’s nearly thirteen hundred dollars.

Out of the box — a very luxe box — it looks fancy, with a titanium case, sapphire crystal, and calf leather strap. But as a colleague said when I wore it to the office, “This looks like a $500 watch. Not a $1,300 one.” I could maybe see spending this much for a fancy Swiss automatic watch that’s meant to be passed down as an heirloom. But this is a smartwatch. It’ll last you roughly two to three years before you need to upgrade. And from a distance, it looks like any other analog-inspired Wear OS watch — just one with exclusive Montblanc watch faces.

Up close, the craftsmanship is a bit more evident. When I went to pick up my review unit, a Montblanc representative said that each case has a hand-polished satin finish to give you that artisanal feel, and it does look nice! Design-wise, the crown stands out, thanks to the Montblanc logo. It’s also one of the better-constructed crowns I’ve ever used. It’s less prone to accidental presses, and it feels like an actual watch crown rather than a button. My only concern is folks with limited mobility or weaker hands might struggle since it requires a bit more force to turn or press.

The Summit 3 wears big compared to other 42mm watches. That’s likely due to the case design, which measures 1.65 inches in diameter and about a half-inch thick. The case weighs 52g, which is strangely heavy for a titanium watch. The 45mm Samsung Galaxy Watch 5 Pro, which also has a titanium case and sapphire crystal, only weighs 46.5g.

Despite the design, the Summit 3’s specs aren’t anything special. It’s got 1GB of RAM and 8GB of internal storage. You also get Bluetooth 5.0, built-in GPS tracking, Wi-Fi, contactless payments, and heart rate and SpO2 monitoring. This is standard for the handful of 4100-powered Wear OS watches out there — the TicWatch Pro 3 and the Fossil Gen 6 watches. The Snapdragon Wear 4100 Plus chip is capable enough of delivering snappy performance on this stripped-down version of Wear OS 3. It’s noticeably less laggy than 3100-powered Wear OS watches, but that’s not saying a whole lot. The bar here is real low. I got about a day’s worth of battery life on this thing, and that’s fairly ordinary for Wear OS smartwatches.

Although the Summit 3 has a scratch-resistant sapphire display crystal, I wouldn’t say the extra durability makes it good for fitness tracking. You can track outdoor workouts with the watch, but the display is hard to read, and the weight is distracting during vigorous exercise like running. It’s fine for casual activity tracking, but I’d leave it at home for anything more serious. Personally, I was too paranoid to take a $1,290 watch for more than a couple of short 30-minute runs.

As for fitness tracking accuracy, once again, it’s fine. Sure, my runs were later recorded as hikes, but the distance, maps, and heart rate data matched the results I got on my Apple Watch Series 7 and on the Runkeeper app. It’s possible that I hit the hiking activity instead of running (I didn’t), but it’s more likely the native fitness app is a bit unpolished, especially since you can’t even view workouts recorded in Montblanc’s fitness app on the phone yet. That’s coming in a later update. For health features like sleep tracking and SpO2, this is alright if you want a broad overview, but there are several other wearables that do it better.

Aside from sleek looks, the most interesting thing about the Summit 3 is that it’s our first indication of what Wear OS 3 can be outside of Samsung watches. Google will almost certainly run a more “improved” version on the Pixel Watch, given what we heard at I/O. (This is somewhat confirmed by the fact Montblanc told me this is the most basic version of Wear OS 3.) Samsung also runs a skin over Wear OS 3 for the Galaxy Watch 4 and Watch 5 series. Other Wear OS 2 devices powered by the 4100 platform haven’t gotten the Wear OS 3 upgrade yet — and possibly won’t until the Pixel Watch has had its debut. So, for the moment, this is it!

After several weeks of testing, I’ve concluded this version of Wear OS 3 is… fine. It feels similar to Wear OS 2 on the Fossil Gen 6 — better than I expected but not particularly exciting. You’re still scrolling through the main menu, but there’s a new card-like look that’s easier to read. You swipe through tiles and notifications. It’s all very familiar, but I felt odd the first few days I used it. I later realized that’s because everything was working relatively smoothly, and I wasn’t used to that on a non-Samsung Android watch. (Though Mobvoi’s TicWatches aren’t half bad.)

The Play Store is much improved. It isn’t a barren wasteland of forgotten apps anymore. Popular services like Strava, Spotify, and Calm have been optimized for the platform. The Summit comes preloaded with a bunch of Montblanc apps, like one for fitness and stress, but you don’t have to stick with them. A robust third-party app ecosystem has been one of Wear OS 3’s main strengths so far, and if it stays that way, this whole experiment stands a fighting chance.

The baffling omission is Google Assistant. It’s just… not there. I asked Montblanc why but was told to ask Google. Google Assistant is available on nearly every Wear OS 2 watch, and now, all Wear OS 3 Samsung Galaxy smartwatches. Apple Watches have Siri. The Fitbit Sense and Versa 3 offer you a choice between Google Assistant and Alexa. Other budget brands, like Amazfit, also feature Alexa. Huawei has its proprietary assistant Celia. Voice assistants are everywhere on smartwatches that cost much less. It’s hard to fathom paying $1,290 for a smartwatch without one.

The other major change is that the Summit doesn’t use the Wear OS phone companion app. Instead, you pair the Summit 3 to a Summit app in either iOS or Android. The Summit app itself isn’t a meaty app, either. There’s not much to do on it aside from futz around with watch faces, read tutorials, tweak settings, and that’s… about it.

I paired the watch with both my iPhone 12 Pro Max and my Samsung Galaxy Note 20 Ultra. The experience is quite similar, at least as far as pairing, setup, and swiping through actual tiles and notifications goes. But the Summit 3 works better with Android phones. Case in point: you can’t use Google Wallet or Google Maps if you’re on iOS. Believe me — I tried several times. Although you can download the app on the wrist via the Play Store, it won’t let you add a card. Downloading Google Wallet on your iPhone in hopes of adding a card to your wrist is also futile.

“At this time, Google Maps and Google Wallet are not available when paired with iOS,” Qualcomm spokesperson Lauren Miller told The Verge on behalf of Montblanc. “We will always work on making our features more helpful and accessible to our users — and will let you know when we have more to share.”

That’s disappointing but expected. The vast majority of iOS users, especially those who’ve gone all in on Apple gadgets, have no reason to buy a Wear OS watch. I imagine Montblanc’s decision to include iOS compatibility is because they’re aiming at the handful of obscenely wealthy iPhone users who want to spend a lot of money on a smartwatch but don’t, for whatever reason, want an Apple Watch — not even the Hermès version. But this piecemeal approach suggests that Wear OS 3 may still end up as a fragmented platform.

You don’t have to look far to see the signs. Samsung’s Wear OS watches run a skin to give them more of a Galaxy flavor. You could completely bypass Google on the Watch 4 and Watch 5 if you wanted. Whenever Fossil’s Wear OS 3 watches arrive, I suspect they may follow Montblanc’s lead and use a Fossil-branded companion app. The same goes for Mobvoi’s upcoming Wear OS 3 TicWatch with the new Qualcomm Snapdragon W5 Plus platform. And whatever we see on the Pixel Watch is likely going to be as close as we’ll get to whatever Google’s true vision for Wear OS 3 is. (Whether it’s successful depends on other things.) The fact that the Wear OS 3 experience may vary so wildly from watch to watch could be a good thing. Greater diversity has always been the pro of Google’s decentralized software approach. Or it could go terribly. We just don’t know because the bulk of Wear OS 3 watches aren’t here yet.

As for the Summit 3, my time with the watch left me with more questions than answers about Wear OS 3’s future. But as a watch, the verdict is straightforward. I can’t recommend this watch and sleep soundly at night. Not because it did anything egregious — it’s a serviceable watch, and if it were more reasonably priced, I might be singing a different tune. But at the end of the day, this is a midtier smartwatch that might be useful for three years, made from materials that are too nice to throw away, at Swiss watch prices. If you can afford it, you do you. Otherwise, I’d wait to see what the rest of fall has to bring for Wear OS 3.

Photography by Victoria Song / The Verge