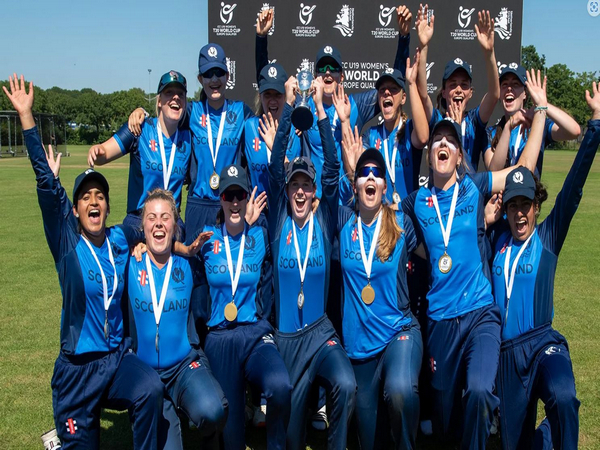 Amsterdam [Netherlands], August 12 (ANI): Scotland has booked their tickets to ICC Under-19 Women’s T20 World Cup 2023 after a series win over the Netherlands.
After a win in the first match, the side led by Katherine Fraser secured their spot in the event to be held in South Africa after a nine-wicket win in the second match that helped them gain an unassailable lead of 2-0. Scotland won the third match by 123 runs, with openers Ailsa Lister and Darcey Carter scoring centuries.
No less than eight Scotland bowlers picked up eight wickets across these three matches. Robyn van Oosterom was the only Dutch batter who could put up a fight of sorts with 39 and 43 runs in match second and third. Scotland’s bowling was extremely tight throughout the series, restricting the Netherlands to 78, 94/7 and 100/7 in these matches. Fraser rotated the bowlers brilliantly.

Scotland has now joined USA, UAE and Indonesia as Associate qualifiers for the event. Indonesia qualified for their first World Cup in any format after defeating Papua New Guinea in a three-match series.
The African Qualifier in Botswana in September will decide who will take the final spot for the event. The hosts will welcome Malawi, Mozambique, Namibia, Nigeria, Rwanda, Sierra Leone, Tanzania and Uganda.
South Africa will host the first-ever ICC Under-19 Women’s T20 World Cup in January next year. (ANI)