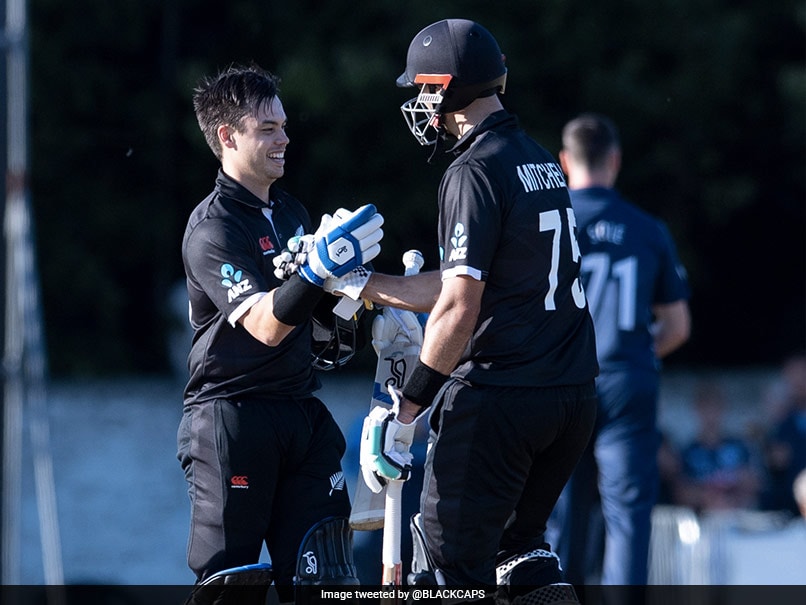 Mark Chapman (left) was declared the Player of the Match.© Twitter

Mark Chapman completed a memorable few days in Edinburgh with an unbeaten hundred as New Zealand comfortably defeated Scotland by seven wickets in a lone one-day international on Sunday. Chapman followed his T20-best 83 in a 102-run thrashing of the Scots on Friday with 101 not out as New Zealand, beaten finalists in the last two 50-over World Cups, also proved too strong for their non-Test hosts in the longer white-ball format. The 28-year-old Chapman shared an unbroken fourth-wicket partnership of 175 with Daryl Mitchell (74 not out) as the Black Caps won with 25 balls to spare as they finished on 307-3 in reply to Scotland’s 306 all out.

“The platform which the boys up top left us was awesome, it really set up the innings,” said Mitchell.

“It was nice to get out in the middle with ‘Chappy’ and get the job done.

“His knock was awesome. It was nice to see him (Chapman) get an ODI hundred, I’m really stoked for him.”

It was Chapman’s second century in seven career ODIs following his unbeaten 124 against the UAE back in 2015.

Martin Guptill (47) and opening partner Finn Allen, with exactly 50, got New Zealand’s chase off to a sound start before the fourth-wicket duo eased New Zealand home despite off-spinner Michael Leask’s 2-46.

Leask had a fine match overall, making 85 and sharing a stand of 92 with Matthew Cross (53) that kept Scotland in the game after they had slumped to 107-5.