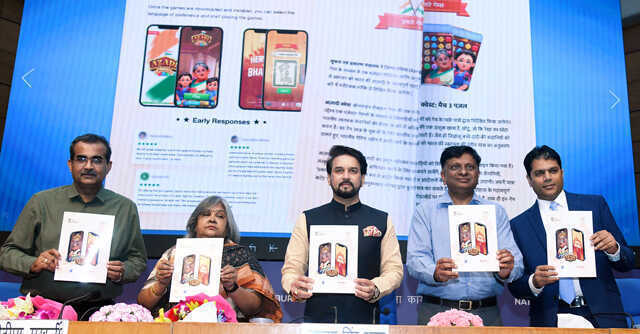 – Advertisement – Union minister of information and broadcasting Anurag Thakur launched Azadi Quest, a series of online educational mobile games developed in collaboration with gaming company Zynga India to commemorate the country’s freedom struggle. The Azadi Quest games can be accessed Android and iOS devices in English and Hindi and will be available worldwide … Read more – Advertisement – To highlight the story of India’s freedom struggle, Union Minister of Information and Broadcasting, Anurag Singh Thakur launched ‘Azadi Quest’, a series of online educational mobile games, in Delhi on Wednesday. Developed in collaboration with Zynga India, as part of the Azaadi ka Amrit Mahotsav celebrations, the first two games in the … Read more – Advertisement – Indian Prime Minister Narendra Modi boldly declared that his country was ready to “feed the world” after Russia’s invasion of Ukraine. Less than four months later, the government needs to consider grain imports. Even before Modi made his pledge, a record-breaking heat wave that started in March was … Read more – Advertisement – The area under paddy in the week ended August 18 was almost 8.25 per cent less than in the equivalent period last year. This was an improvement over the almost 15 per cent shortfall in the previous week, the latest data from the agriculture ministry showed. The … Read more

– Advertisement – The government on Friday said GST will not be applicable on residential units if they are rented out to private persons for personal use. The government dismissed media reports which claimed that there is an 18 per cent Goods and Services Tax (GST) on house rent paid by … Read more

– Advertisement – The case of a Nebraska woman charged with helping her teenage daughter end her pregnancy after investigators obtained Facebook messages between the two has raised fresh concerns about data privacy in the post-Roe world.  Since before the U.S. Supreme Court overturned Roe v. Wade in June, Big Tech companies that collect personal … Read more

– Advertisement – The central government has re-nominated Satish Kashinath Marathe, Swaminathan Gurumurthy, Revathy Iyer, and Sachin Chaturvedi as part-time, non-official directors on the central board of the Reserve Bank of India. The re-nominations of Gurumurthy and Marathe are for a further period of four years with effect from Thursday or … Read more

– Advertisement – NEW DELHI: The ED probe into alleged money laundering by crypto exchange WazirX and the subsequent squabbling among its promoters has revealed the ‘darker side’ of cryptocurrencies, a top government source said on Thursday. The source added that people should exercise caution in absence of a regulation to govern cryptocurrencies and so-called … Read more