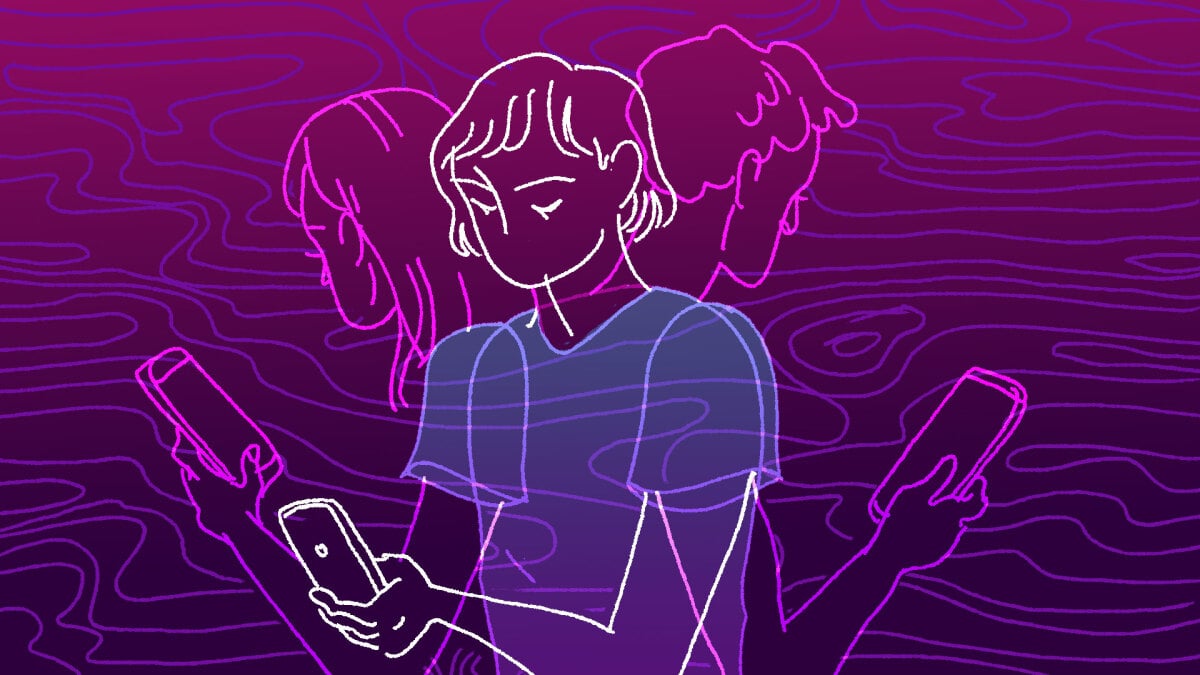 Ad P
An arm that looks weirdly long. Buggy eyes that peer up at the camera. Legs for days. Tiny bodies.

This is a new type of selfie, the 0.5 one, that doesn’t take itself too seriously. If the 0.5 selfie was a person, it would be the friend who is always on hand to lighten the mood with a joke, but knows when to be serious too. It’s pronounced “point five,” by the way.

24-year-old Aba is a designer and creative from London and loves to take 0.5 selfies, the ultra-wide lens camera setting first available on the Samsung Galaxy S10 in 2019 and then on Apple’s iPhone 12. “I saw someone on TikTok post one,” she tells me. “I was like damn, that looks so nice.” Aba is 5’10’’ but likes the fact that 0.5 selfies make her look even “longer.”

While the 0.5 selfie aesthetic might be new, portrait photographer Drew Forsyth, explains that “wide angle lenses have been around almost as long as photography itself.” “The first successful wide-angle lens was developed in 1862,” he explains. “It was called the Harrison & Schnitzer Globe and had a 92° maximum field of view – bearing in mind the newest iPhone’s wide angle has a field of view of 120°.” Cameras have come a long way in terms of development since the 1800s, [thanks to smartphones that offer more sophisticated features] and Drew thinks that’s a great thing for creativity.

Think pink: The rise of #Barbiecore


Smartphones are now so much more readily available, accessible and affordable, and that means an increase in self-portraiture. “The democratisation of photography in the last 20 years has been an incredible thing to behold, and putting a camera in the hands of billions of people worldwide through smartphones has totally reshaped our culture and lived experiences,” he says. “Having a 0.5 lens allows you to see the world in a different way, and I think plenty of people are curious, and exploring the ‘new’ technology.”

What is barrel distortion?

But how does a wide angle camera lens actually work, and why does it make us look funny? “The reason different parts of your body look bigger and smaller is because of something called ‘Barrel Distortion,'” says Drew. “So things at the centre of the photo look bigger, and things at the edges look smaller, or further away. That’s because, when what the lens sees is wider than the sensor on a digital camera or phone, the image looks like it’s been distorted to fit in the edges of the frame. This can look weird and strange.” That’s why you might see people’s foreheads, for example, look a little bigger than they actually are in real life.

It reminds me of a polaroid or a film camera where you have to wait 24 hours for it to develop.


Candid and casual, the 0.5 lens is built into the back camera of the phone which means you can’t see the image until you’ve taken it, resulting in a less polished result. “That’s the beauty of it,” Aba agrees. “It reminds me of a polaroid or a film camera where you have to wait 24 hours for it to develop.” Thankfully, being in 2022 means that the time it takes for you to flip your iPhone around and pull up the picture only takes a couple of seconds.

It also harks back to the 2000s and early 2010s, a nod to those weirdly angled selfies we would take in the BBM (BlackBerry Messenger) days – BlackBerry’s IM service, post MSN and pre-WhatsApp. You took them with a digital camera and didn’t care that your arm was visible. The picture would come out slightly blurry but it wouldn’t matter, and you wouldn’t bother to retake them. Ah, nostalgia.

The 0.5 selfie is the antithesis of what we are inundated with on Instagram: FaceTuned selfies and perfectly curated feeds. And the democratisation of beauty means that people are rebelling against what’s considered conventionally attractive.

A shift in the way we use Instagram was way overdue. How many times have you opened the app just to find soulless perfectly-planned-out-reels from influencers you don’t even follow on holiday in the Bahamas? After Instagram’s most recent update, photographer Tati Bruening, aired her frustration by posting an infographic on the app that read: “Make Instagram Instagram again. Stop trying to be tiktok i just want to see cute photos of my friends.” The post signed off “sincerely, everyone.” And it seemed like the whole world was behind her, it received 2.2 million likes, and Kim Kardashian, Kylie Jenner, and Chrissy Teigen reposted the image in agreement.

As I open my Instagram right now, I only have to scroll for about a minute and I’ve already seen way more suggested posts than my eyes would want to see, and way too many sponsored posts advertising products I’m definitely not going to buy (one was a post persuading me to travel first class by train, in a cost of living crisis?).

But social media users are now rebelling against what is seen as the new normal, longing for the times we used social media in a simpler way. Mark Bage is creative director at creative agency Not Studio. He thinks people have simply had enough. “We’ve seen various iterations of this anti-aesthetic over the past 18 months and one of the ways this has manifested is in the 0.5 selfie,” he says. “It’s an understandable shift given the nature of the social media landscape; on the one hand users are moving away from homogenous, overly curated content towards something more raw, and on the other hand visibility is down so content is extra disposable.”


In 2022, Gen Z are carving out their own path, a reimagined version social media, free from millennial influences. Alice Ophelia, one of the authors of Gen Z and culture newsletter High Tea, points to the rise of the 0.5 selfie coinciding with a gradual shift in aesthetics that we’ve seen Gen Z embrace. “IRL stylistic curation has returned in this post-pandemic era – well, almost post-pandemic,” she tells me.

“This shift in presentation sits in the wider context of Gen Z creators and consumers forging their own space within inherited platforms like Instagram, and how they continue to reject heavily curated and manufactured ‘millennial aesthetics’ of the 2010s. Think: flat lays, filters, and boomerangs.”

Zoe, 20-year-old actress from LA, California, says that her 0.5 selfie obsession started when she and her friends started sending them to each other. “I started to send these selfies to update my friends on where I was and what I was doing!”

“I love that you can see most of the setting of where the picture is being taken,” she adds. “My favourite one I’ve taken is me at a grocery store. It is so random, I love that I documented such a casual moment in my day. I think 0.5 selfies allow for a more casual side of social media, rather than the constant filters and poses.” She likes the “weird” effect too, and how “silly” they look as well as the way it makes her arms look “super long.”

“Deliberately chaotic, ugly, and often distorted” is the brand Alice thinks the 0.5 selfie lends itself to. “It is all about being subversive with the presentation of self. We’re seeing this appetite for subversion play out in the popularity of y2k fashion, nostalgia for early internet aesthetics, and revival of interest in platforms like Tumblr and the indie sleaze trend.”

Although 0.5 selfies are a refreshing change from what we’re used to, there is still a level of perfecting that goes into taking one. Will we ever experience Instagram with the same innocence and curiosity we had when the app was first created in 2010?

It was a very different time. You’d scroll through your Instagram and see mundane snaps posted by your friends, of a half eaten burger with the sepia filter used on max, or a front cover of their school revision book. It would get 9 likes, maybe 10 if you were lucky.


Tweet may have been deleted
(opens in a new tab)


Personally, I don’t think we ever will. ​​“While the 0.5 selfie may seem, at first glance, to reject the cringey aesthetics of effort and sincerity, it still absolutely plays into a level of performative curation – albeit one of self-deprecation,” Alice believes. “We’re seeing this with the likes of Charli D’Amelio wearing graphic tees that read “ironically hot” and “I ” – as well as Julia Fox’s outlandish red carpet makeup looks and DIY fits.”

The 0.5 selfie is a refreshing trend that’s fun and is bringing people joy, something that we should appreciate for what it is. However, we’ve somehow fallen into a culture of trying to curate candidness, and a faux “couldn’t care less” attitude, as Alice highlights. 0.5 selfies are probably less organic than we might think.