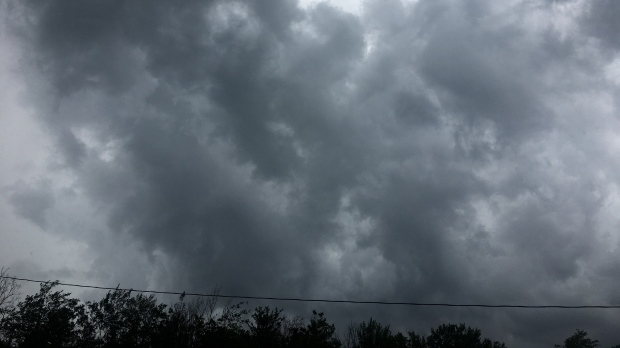 Several weather advisories have been issued for some parts of the Greater Toronto Area as a thunderstorm moves through the region.

The federal agency says its meteorologists continue to track a thunderstorm that could produce strong wind gusts, pea- to dime-sized hail and heavy rain.

Some areas could see up to 50 millimetres of rain, Environment Canada said. Rainy and windy conditions are expected to continue through the evening.

The severe thunderstorm warning for Halton Hills and Milton replaced a tornado warning issued around 3:30 p.m. It was lifted just before 4 p.m.

Meanwhile, the Toronto and Region Conservation Authority has issued a water safety alert due to the storm.

“Due to the rainfall received today morning and the total rainfall expected all rivers within the GTA may experience higher flows and water levels,” the TRCA said in its advisory.

“Conditions along watercourses may change rapidly due to heavy downpours in a short amount of time. The combination of slippery and unstable banks, and rising water levels could create hazardous conditions near rivers or other water bodies.”

For the rest of the day, it will be mainly cloudy in Toronto with a 60 per cent chance of showers. Environment Canada said there is a risk of a thunderstorm in the evening and after midnight.