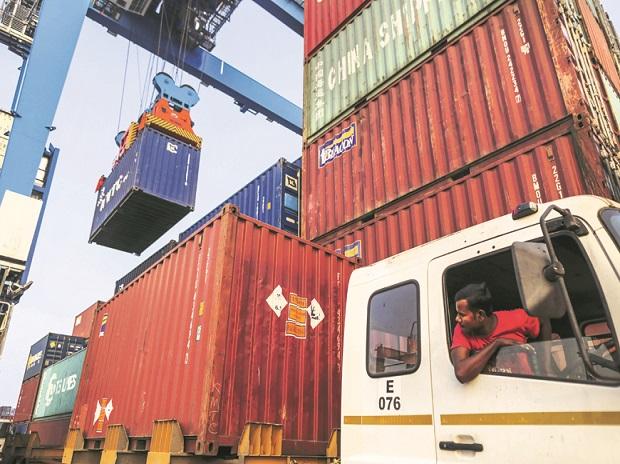 
India’s trade deficit widened to a record $30 billion in July as exports grew at a much slower pace compared to imports, data released by the commerce and industry ministry showed on Friday.

Merchandise exports declined to a five-month low of $36.27 billion in July but witnessed a marginal increase of 2.14 per cent year-on-year (YoY). The preliminary data released on August 2 had shown a 0.76 per cent contraction in exports at $35.24 billion, and even a wider trade deficit of $31 billion, for July.


The rise in imports has been mainly due to an increase in the purchase of petroleum products, electronic goods, and coal. Among major import items, gold declined 43.6 per cent to $2.37 billion after the Centre raised import duty on the metal last month. However, import of non-oil and non-gems and jewellery products grew 42.91 per cent due to recovery in domestic economic activities as well as elevated price pressure.


As for outbound shipments, there was a contraction in some of the key drivers of export growth in India. Engineering goods witnessed a 2.08 per cent contraction, gems and jewellery 5.2 per cent, pharmaceuticals 1.05 per cent, readymade garments 0.6 per cent, and cotton yarn 28.17 per cent, amid tepid demand from Western nations. However, some items continued to witness growth. Petroleum products grew at 9.18 per cent, chemicals 8.03 per cent, electronic goods 46.0.9 per cent, and rice 30.88 per cent.


A Sakthivel, president, Federation of Indian Export Organisations, said signs of a likely slowdown in exports could be seen as global inventories were pretty high.


“Merchandise exports are facing the triple whammy – there is again a shift in consumption from goods to services with the opening up of economies after the Covid-19 pandemic; the inflation affecting all economies by reducing the purchasing power; and many economies entering the recession while some advanced ones already in recession,” Sakthivel said.


Besides, the normalisation of Covid disruptions has also added to the piling up of inventory as goods that used to reach the West Coast of the United States in 150 days now reach in only 60 days, he added.


“The recession fears in the West have added to the uncertainties. While geopolitical risks remain elevated and pose downside risks to growth, the recent softening in commodity prices has come as a relief,” Desai said.


Earlier this month, Commerce Secretary B V R Subhramanyam had said that with fears of recession looming in some of India’s largest export markets — the US and Europe — India should be “worried”, although India will be able to compensate for the hit from these two regions with recently signed trade deals with the United Arab Emirates and Australia.