Ad P
A MiG-21 Bison aircraft of the Indian Air Force (IAF) crashed in Rajasthan’s Barmer on Thursday night (July 28), killing the two pilots aboard the fighter aircraft. The incident led to a social media uproar while many expressed their condolence. Some even questioned the poor safety record of these MIG-21 aircrafts.

Like many others, Shilpa Shetty was also shocked to hear the news and the actress took to her social media handle to offer her heartfelt condolence and prayers for the families of the pilots who died in the crash. 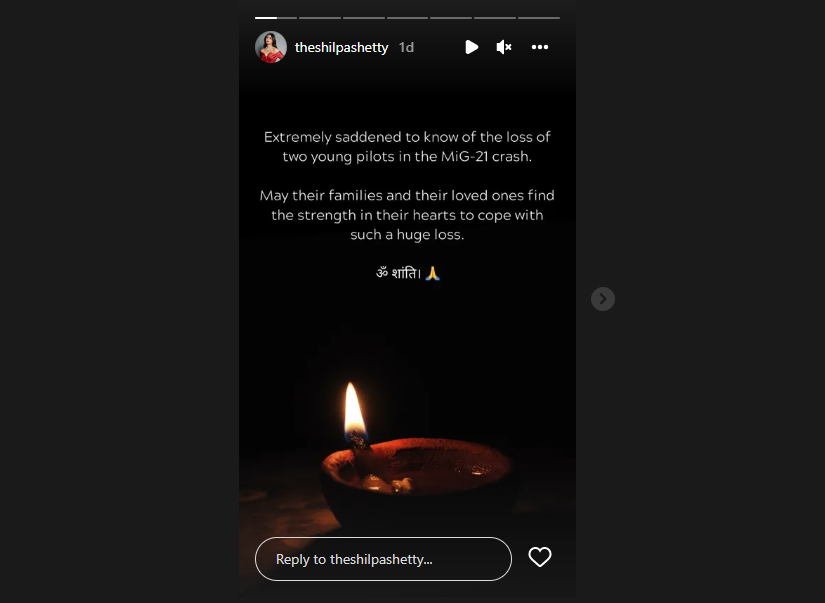 “Extremely saddened to know the loss of the two young pilots in the MiG-21 crash. May their families and loved ones find the strength in their hearts to cope with such a huge loss,” wrote Shilpa on her Instagram stories.

As per the statement released by the IAF, it was a trainer version of the fighter aircraft carrying two pilots. Since it was a training mission there was one senior pilot, Wing Commander M Rana, and a junior pilot, Flight Lieutenant Adivitya Bal on board.

Shilpa Shetty was last seen in the comedy caper ‘Nikamma’ co-starring Abhimanyu Dasani and Shirley Setia. The film is a remake of the Telugu hit ‘Middle Class Abbayi’.