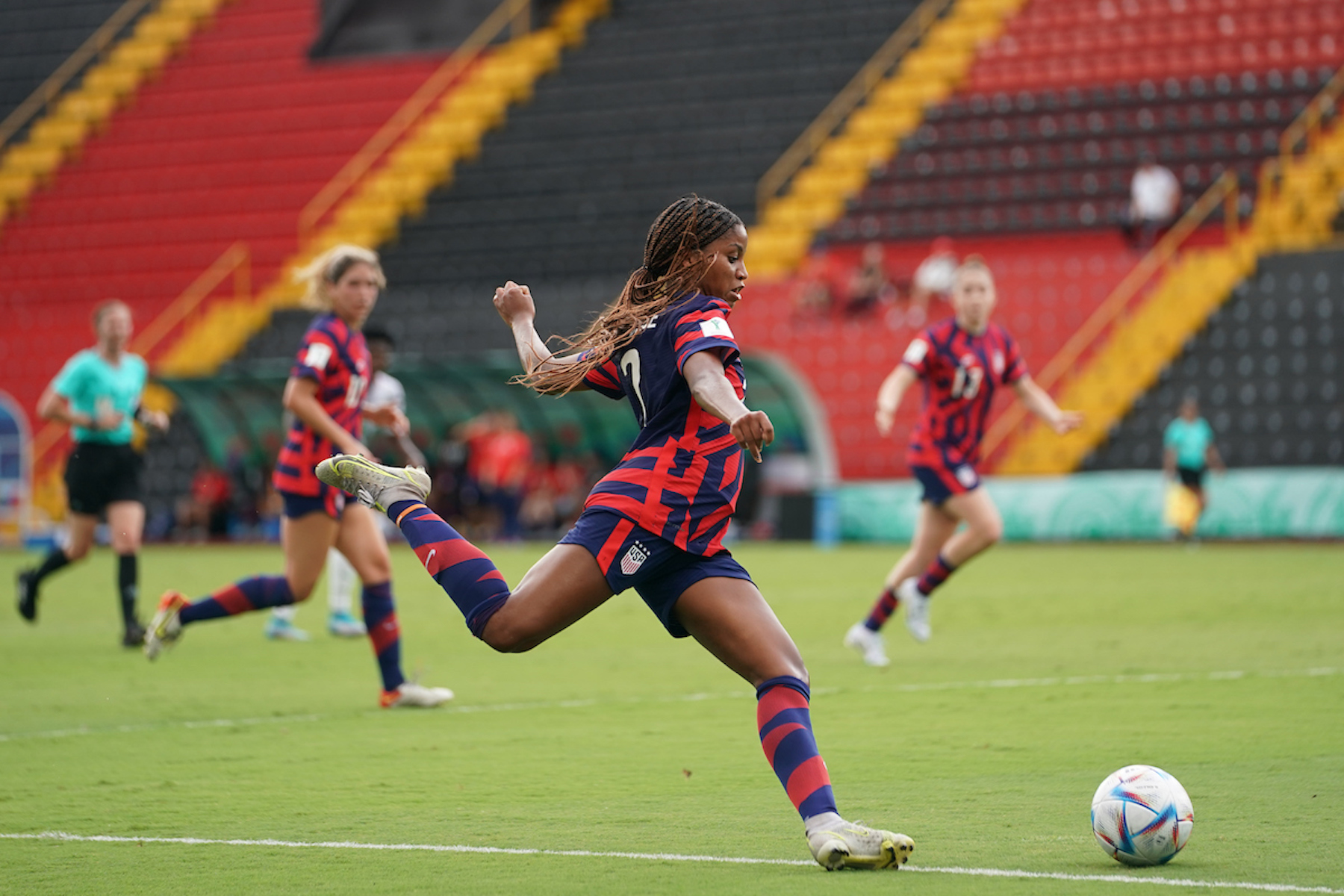 After a convincing 3-0 win to open the 2022 FIFA Under-20 Women’s World Cup, the U.S. Under-20 Women’s Youth National Team will continue Group D play on Sunday, Aug. 14 against the Netherlands at Estadio Nacional in San José (7 p.m. ET; FS1). It will be the first meeting between the USA and the Dutch in a FIFA U-20 Women’s World Cup. Of course, the senior teams met in the 2019 FIFA Women’s World Cup Final in Lyon, France, a 2-0 victory that gave the USA its fourth World Cup title. The USA will finish the group stage against Japan on Wednesday, Aug. 17 back at Estadio Morera Soto (7 p.m. ET; FS2). Fans can follow the U-20 WYNT throughout the tournament on ussoccer.com, Facebook, Twitter (@USYNT) and Instagram (@USYNT).

The USA-Ghana game was the first youth Women’s World Cup match for a U.S. team in almost exactly four years since the 2-2 draw with Spain on Aug. 13, 2018, to end group play at the 2018 FIFA U-20 Women’s World Cup in France. With Japan defeating the Netherlands, 1-0, in the other Group D match, the USA is currently on top of the group with a plus-3 goal difference to Japan’s plus-1.

Each of the 32 matches of the tournament will be broadcast on either Fox Soccer Plus (8 matches), FS1 (10 matches) or FS2 (14 matches) and are available online at Foxsports.com and the Fox Sports App with corresponding authentication. All the knockout stage matches will be shown on either FS1 (5 matches, including both semifinals and the championship game) or FS2 (3 matches). Additionally, all 32 games are being streamed live on FIFA+ in territories that do not have TV rights holders for the tournament. The first eight matches featured some close games – five of which were one-goal games or draws – and two upsets, as Colombia downed Germany, 1-0, and Nigeria scored late to beat France, 1-0. In fact, the USA’s 3-0 win over Ghana was the largest margin of victory in any game over the first two match days.

The USA’s convincing 3-0 win over Ghana marked the USA’s fifth win in an opening match of a FIFA U-20 Women’s World Cup. The USA had failed to win its opening match in its last three U-20 Women’s World Cup appearances with two losses and draw. The only other time the USA failed to win its opening match of a U-20 World Cup was a 1-1 draw with Ghana in 2010. This time around, the USA out-shot Ghana 21-5 and did not allow a shot on goal. The USA scored at opportune times, getting an 11th minute goal from team captain Michelle Cooper, a 38th minute score from Alyssa Thompson after Ghana’s Jacqueline Owusu had received a red card for stomping on the Achilles tendon of midfielder Korbin Albert, and then again just six minutes into the second half via Ally Sentnor to effectively put the game away. The USA will rue not finding the net a few more times after playing with a player advantage for almost an hour. Ghana went hard into every tackle and received four yellow cards in addition to the red.

Midfielder Sally Menti was ruled out of the 2022 FIFA Women’s World Cup after suffering an ACL tear in her right knee during training in Costa Rica prior to the tournament. She has been replaced by midfielder Annie Karich, a rising freshman at Santa Clara, the college Menti also attends. The 5-foot-9 Karich (pronounced Care-ick) hails from Surfside, California and has one cap at the U-20 level, although she also has experience with the U.S. U-15 and U-17 Women’s Youth National Teams. She arrived in Costa Rica on Aug. 13. “We’re absolutely gutted for Sally,” said U.S. U-20 WYNT head coach Tracey Kevins. “She’s a fantastic person and player, she has a great support system from her family, the National Team and at Santa Clara, so we know she’ll come back strong. Our players are a very tight-knit group and I know they will keep her in their hearts during this tournament, but at the same time, we’re looking forward to welcoming Annie back into our team.”

Video: The U.S. U-20 WYNT Arrives in Costa Rica

Video: Neeku Purcell and the Search for Sloths Video

Video: Behind the Scenes at the FIFA Media Shoot

This year marks the 10th edition of the FIFA U-20 Women’s World Cup, FIFA’s most high-profile women’s competition after the World Cup and the Olympic Games. The biennial competition began as the FIFA U-19 Women’s World Championship in 2002 and was held as a U-19 event in 2004 before moving to its current Under-20 format in 2006. The 16 nations were drawn into four groups of four teams. The top two finishers in each group advances to the quarterfinals, to be held on Saturday, Aug. 20 and Sunday, Aug. 21. The winners of those matches move on to the semifinals on Thursday, Aug. 25. The Championship and Third-Place match will be played on Sunday, Aug 28. The USA is one of four teams to have qualified for every FIFA WWC at this age level, along with three-time champions Germany, Brazil and Nigeria.

All matches of the World Cup are being played at two venues which are only about 12 miles apart: Estadio Nacional in San Jose (capacity 34,024 for the tournament) and Estadio Morera Soto in Alajuela (downsized to 4,980 for the U-20 WWC), which is named after a famous Costa Rican player who played for Barcelona in the 1930s. The stadium was named in 1966 in honor Soto, whose heart was buried in one of the stadium’s columns. Currently all the energy used by the stadium is 100% solar, which makes it one of the few stadiums in all Central America, Mexico and the Caribbean to be completely supplied with renewable energy.

USA U-20 WYNT vs. NETHERLANDS: