Ad P
TikTok has seen remarkable growth in popularity since its global debut in 2018. The app introduced a new social media craze: short-form videos. No wonder American teens love it. According to a Pew Research survey, 67 percent of US teens (aged 13 to 17) use TikTok. About 16 percent of all teens use the app almost constantly. Only YouTube is more popular among that age group.

The new research report states that about 95 percent of American teens use YouTube. One out of every five teens (19 percent) is on the video-sharing platform almost all the time. It’s worth noting that YouTube has also introduced a TikTok-like platform for short videos called Shorts within the main app, following the success of the latter.

Instagram and Snapchat are the next two popular social media apps among US teens, with a usage percentage of 62 percent and 59 percent, respectively. That’s notable growth in popularity from 52 percent and 41 percent, respectively, during the 2014-15 period. Note that Instagram and Snapchat have also copied TikTok. Their respective short-form video platforms are called Reels and Spotlight.

Gone are the days when pretty much everyone had a Facebook account. The social media behemoth is losing popularity, particularly among Gen Z. Only about 32 percent of American teens use Facebook today. Seven years back, the figure came in at a whopping 71 percent. Of course, YouTube, TikTok, Instagram, and Snapchat are eating onto Facebook’s share.

Twitter is another social media platform that does not appeal to teens. With 33 percent usage in 2014-15, it wasn’t much popular among the 13 to 17 age group back in the days when TikTok didn’t even exist. The microblogging site has seen a further decline in teen users, with only about 23 percent of them now having a Twitter account.

This Per Research survey also asked American teens about their usage of Twitch, WhatsApp, Reddit, and Tumblr. The positive responses came from 20, 17, 14, and 5 percent of respondents, respectively. While the former three were not part of the 2014-15 survey, Tumblr had a usage percentage of 14 percent back then. 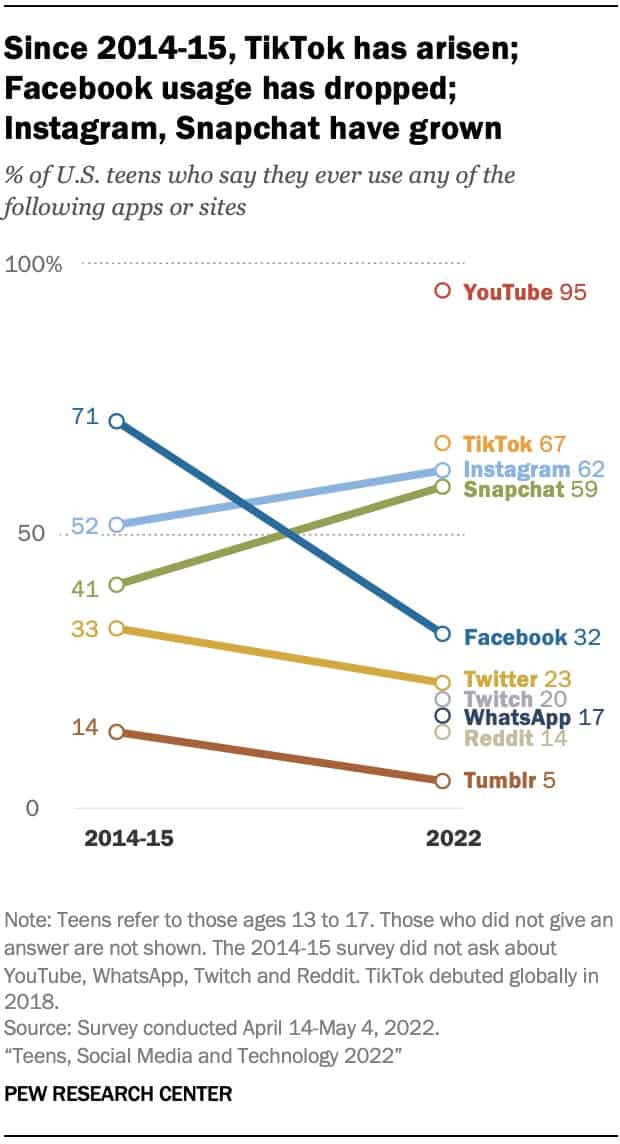 Teens girls find it hard to give up social media

This survey found that more than a third of teens (36 percent) feel they spend too much time on these apps. 54 percent of teens say it would be hard for them to give up social media. Teen girls find it harder than boys (58 percent vs. 49 percent). The older teens get, the harder it is to leave social media, the report suggests.

Teens’ access to smartphones has also increased from 73 percent in 2014-15 to 95 percent in 2022. Almost all of them (97 percent) report using the internet daily, up from 92 percent during the previous survey. This share is higher among older teens than in younger ones. About 52 percent of teens between 15 to 17 years use the internet almost constantly, while only 36 percent of 13 to 14-year-old teens say the same.

These findings are based on an online survey of 1,316 American teens conducted from April 14 to May 4, 2022. You can read the full report here.